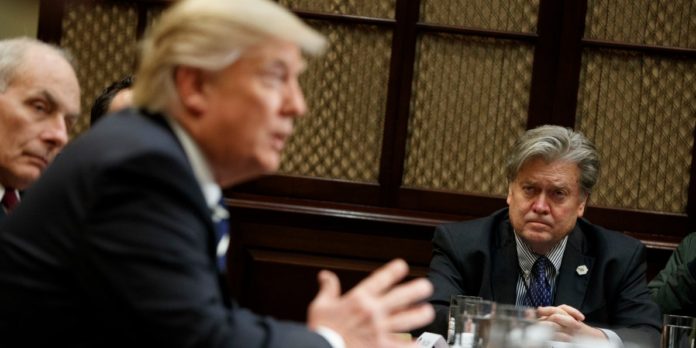 Since being dismissed from the White House by President Trump in August, Steve Bannon has laid the foundation for an insurrection of his own against the GOP.

Bannon found himself directly at odds with Trump last week over the GOP runoff election for the vacant Senate seat in Alabama. Bannon supported Moore, the insurgent candidate. Luther Strange was the GOP “establishment” candidate who had the backing of the President.

At Odds With the President

This election created a rift between Trump is some of his more vocal supporters, not just Bannon. Sarah Palin, former Alaska governor, and Ben Carson, Trump’s Housing and Urban Development Secretary, both endorsed Moore. If you don’t know, Moore is a former Alabama Supreme Court Justice. He is devoutly Christian, placing the U.S. Constitution second to God’s will.

Bannon, back at Breitbart News, will be taking the momentum from this victory and applying it to other incumbents. Senator Bob Corker has already announced that he won’t be seeking re-election, dudging that bullet altogether. After Moore’s victory in Alabama, Bannon said that “last night we talked about starting a revolution with Judge Moore’s victory.” He then added “well, Sen. Corker stepped down today, he’s not going to run for reelection.”

Whether or not Trump espouses the populist language that he rode in on, Bannon is carrying that torch himself. Bannon has the financial backing of Robert Mercer, a wealthy republican donor. The Mercers have stakes in Breitbart and Cambridge Analytica, the data firm used by the Trump campaign.

After Moore’s victory, Bannon delivered a dire warning shot straight at other Republican incumbents that have been critical of Trump. “You are going to see in state, after state, after state, people that follow the model of Judge Moore, that do not have to raise money from the elites, the crony capitalists, from the fat cats in Washington D.C., New York City and Silicon Valley.”

Also, in Bannon’s sites are Arizona Sen. Jeff Flake and Nevada Sen. Dean Heller. Flake is a prime target considering his vocal criticism of the President. Andrew Surabian, a former colleague of Bannon’s while at the White House, thinks that establishment Republicans should be very worried about their seats.

“Steve’s goal is to elect Republicans who don’t just pretend to agree with President Trump on those core issues and will have his back and not Mitch McConnell’s,” he told USA Today.