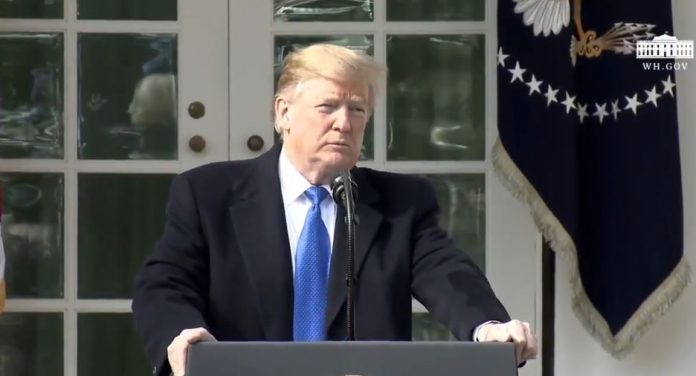 President Donald Trump finally declared a national emergency to spend $8 billion to build a wall along the U.S.-Mexico border, bypassing Congress’ power of the purse.

The President’s action comes after the Congress only approved $1.375 billion in border funding. He demanded $5.7 billion.

In his remarks at the White House Rose Garden on Friday, Trump said he is “signing a national emergency…because we have an invasion of drugs, invasion of gangs, invasion of people, and it’s unacceptable.”

Trump stressed that the influx of criminals, gangs, and drugs through the southern border is a national security crisis. He wants to stop it “one way or another.” He added that it is very hard to stop the crisis, but “with a wall it would be very easy.”

Additionally, the President is expecting a legal challenge to his action but he is confident that his administration will prevail. He said, “We will have a national emergency and we will then be sued. We’ll possibly get a bad ruling, and then we’ll get another bad ruling, and then we’ll end up at the Supreme Court and hopefully we’ll get a fair shake.”

Furthermore, Trump said he didn’t need to declare a national emergency because he “could do the wall over a longer period of time.” He said, “I didn’t need to do this, but I’d rather do it faster. I want to get it done faster, that’s all.”

It appears that the President just contradicted himself or weakened his argument that there a national emergency crisis at the border that needs a unilateral action.

House Speaker Nancy Pelosi and Senate Minority Chuck Schumer condemned Trump for his “unlawful declaration over a crisis that does not exist.”

In addition, Democratic leaders said, “This is plainly a power grab by a disappointed President, who has gone outside the bounds of the law to try to get what he failed to achieve in the constitutional legislative process.”

Furthermore, Pelosi and Schumer emphasized that Trump violated the Congress’ exclusive power of the purse” under the Constitution. His “emergency declaration if unchecked, would fundamentally alter the balance of powers” in the government.