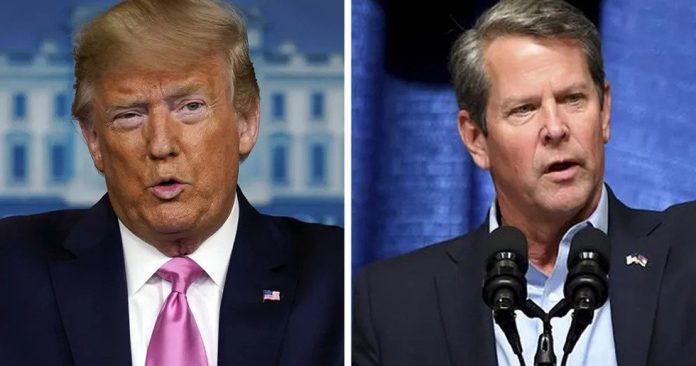 President Donald Trump is at odds with Georgia Governor Brian Kemp, a Republican that the president says he is “ashamed” that he endorsed him.

The president has asked that Gov. Kemp use his executive powers to more carefully scrutinize ballots in the November presidential election, but Kemp has refused.

“Why won’t Governor @BrianKempGA, the hapless Governor of Georgia, use his emergency powers, which can be easily done, to overrule his obstinate Secretary of State, and do a match of signatures on envelopes.

“It will be a ‘goldmine’ of fraud, and we will easily WIN the state,” the president said in a tweet on Monday.

But Gov. Kemp is not budging from his position and said that the power to do the things the president is asking for lies solely with the Georgia Secretary of State Brad Raffensperger.

“Georgia law prohibits the governor from interfering in elections. The Secretary of State, who is an elected constitutional officer, has oversight over elections that cannot be overridden by executive order,” Gov. Kemp spokesman Cody Hall told The Atlanta Journal-Constitution.

“As the governor has said repeatedly, he will continue to follow the law and encourage the Secretary of State to take reasonable steps – including a sample audit of signatures – to restore trust and address serious issues that have been raised,” he said.

After the president made his remarks on Twitter his campaign sent a fifth request to Raffensperger asking for a signature audit.

“It is not possible for you to accurately certify the results in the presidential race from the November 3, 2020 election until and unless there is a thorough audit of the signatures, which we have now requested four times in writing prior to this request. You cannot in good faith conclude the ongoing statutory recount until you have instituted a signature matching audit,” Trump campaign attorney Ray Smith said.

“Until the signatures are matched, the vote count in Georgia is a complete fraud,” former New York City Mayor and current attorney for the president, Rudy Giuliani, said. “There is no way of knowing which ballots are honest and which ballots are fraudulent.”