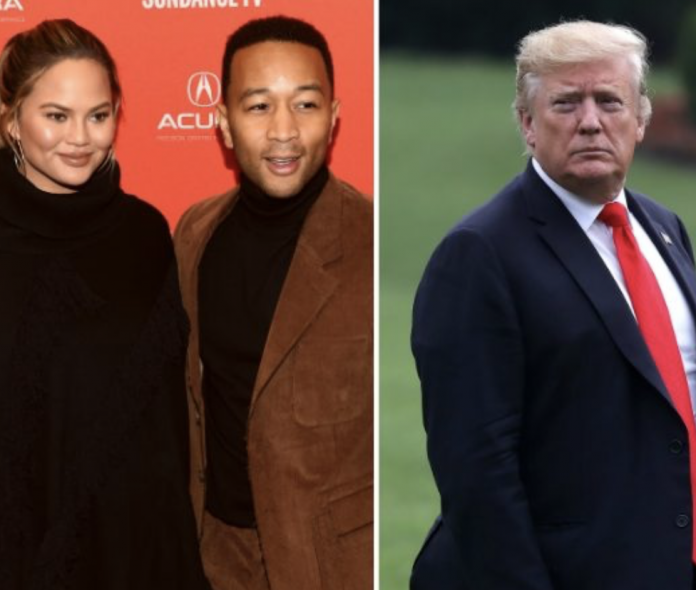 Over the course of President Trump’s time in office, he’s vowed to tackle a series of issues. One of those issues just so happens to be criminal justice reform. This is something which the Trump administration started addressing last year, first with the release of Alice Marie Johnson.

Prior to the intervention of Kim Kardashian West and President Trump, Johnson was set to remain in prison for life due to a nonviolent drug offense. However, the president granted Johnson clemency after a meeting with Kardashian-West. In December 2018, Trump also signed the First Step Act into law.

Over this past weekend, the president took issue with the manner in which people have addressed criminal justice reform since his passing of the First Step Act. Trump articulated his concerns on Twitter, prompting some choice words from Hollywood stars John Legend and his wife Chrissy Teigen.

Everything You Need to Know About Words Exchanged Between Trump, Legend, and Teigen

During last night’s MSNBC coverage of criminal justice reform, the president tweeted that many of his most outspoken critics are taking credit for accomplished progress and failing to acknowlegde the role he played.

During this series of tweets, Trump also called out John Legend and Chrissy Teigen; both individuals are outspoken detractors of the president.

Trump’s tweets on the matter read as follows:

When all of the people pushing so hard for Criminal Justice Reform were unable to come even close to getting it done, they came to me as a group and asked for my help. I got it done with a group of Senators & others who would never have gone for it. Obama couldn’t come close….

….A man named @VanJones68, and many others, were profusely grateful (at that time!). I SIGNED IT INTO LAW, no one else did, & Republicans deserve much credit. But now that it is passed, people that had virtually nothing to do with it are taking the praise. Guys like boring…..

….musician @johnlegend, and his filthy mouthed wife, are talking now about how great it is – but I didn’t see them around when we needed help getting it passed. “Anchor”@LesterHoltNBC doesn’t even bring up the subject of President Trump or the Republicans when talking about….

…..the importance or passage of Criminal Justice Reform. They only talk about the minor players, or people that had nothing to do with it…And the people that so desperately sought my help when everyone else had failed, all they talk about now is Impeaching President Trump!

Following this series of tweets, both John Legend and Chrissy Teigen responded to the president. Legend mocked Trump for expecting accolades for his work on criminal justice reform; the singer also urged First Lady Melania Trump to “praise” her husband.

In Legend’s own words:

Imagine being president of a whole country and spending your Sunday night hate-watching MSNBC hoping somebody–ANYBODY–will praise you. Melania, please praise this man. He needs you.

Your country needs you, Melania

Legend then retweeted a gif with a caption claiming that the First Lady is too “occupied” with other matters to notice the president:

At this point, Teigen also weighed in. She hit the president for failing to “tag” her in his original tweets:

lol what a pussy ass bitch. tagged everyone but me. an honor, mister president.

no guys no please do not make this trend, for it is my fight with #PresidentPussyAssBitch, not yours!!!!!! https://t.co/hSJ0UxjbaO

President Trump has not responded to the censure from Legend and Teigen. Trump has, however, criticized reports which allege that he ignored feedback from the vice president and his advisers on a seperate matter. The president branded these claims as “fake news” and furthermore denounced talk about an allegedly forthcoming recession.

A lot of Fake News is being reported that I overruled the VP and various advisers on a potential Camp David meeting with the Taliban. This Story is False! I always think it is good to meet and talk, but in this case I decided not to. The Dishonest Media likes to create…

…the look of turmoil in the White House, of which there is none. I view much of the media as simply an arm of the Democrat Party. They are corrupt, and they are extremely upset at how well our Country is doing under MY Leadership, including…

…the Economy, where there is NO Recession, much to the regret of the LameStream Media! They are working overtime to help the Democrats win in 2020, but that will NEVER HAPPEN, Americans are too smart!