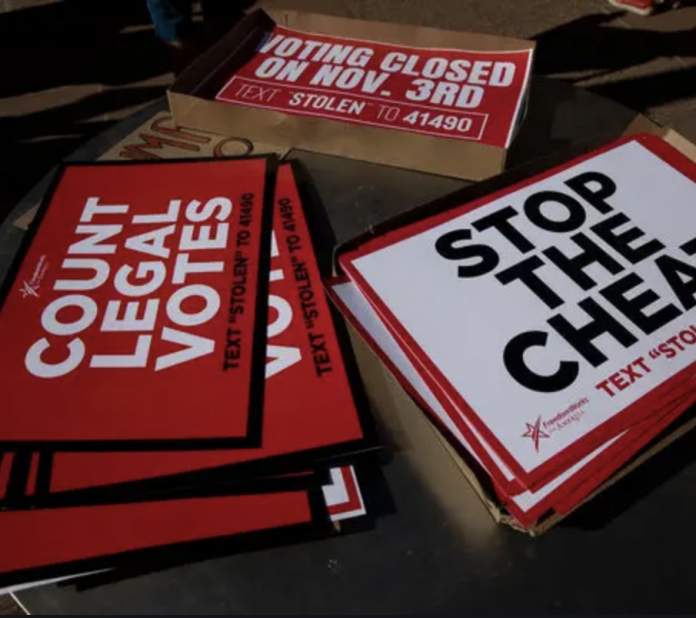 The 2020 presidential election remains hotly contested with 13 days past since Election Day. Despite the liberal media’s narratives that voter fraud did not taint the race, President Trump’s campaign is presenting substantial evidence asserting otherwise.

Thus far, the American people have heard reports about backdated voter ballots, faulty errors with Dominion Voting Systems, and so much more. What’s most disturbing about all of this is that the aforementioned details barely comprise the tip of the iceberg.

Democrats and their allies want to override our process because they know a thorough and complete investigation will reveal that this was a PERVASIVE FRAUD carried out on the American people!

In an email sent out to Trump supporters this Monday, the president’s re-election team released new and shocking details about the depths of voter fraud they’ve discovered thus far.

The extent of cheating in the 2020 presidential election

Per the Trump campaign, they are in possession of 234 pages of sworn affidavits; within these hundreds of pages are irregularities staining the 2020 election in merely one Michigan county alone.

This, of course, raises reasonable questions. If there are this many reports of fraud in just one county, how many hundreds or thousands of other reports will there be in other counties and states across America?

Georgia won’t let us look at the all important signature match. Without that the recount is MEANINGLESS. Open up unconstitutional Consent Decree, NOW! @BrianKempGA

In this morning’s email to Trump supporters, the president’s campaign noted the following: swaths of ballots with the same signature, ballot batches scanned up to five times, unmarked ballots filled out by poll workers, and the counting of ballots with no connection to any voter record.

This is just the first half of what the Trump campaign is reporting. The email also draws attention to the physical pushing of GOP poll watchers; Republican poll watchers also reportedly faced dismissals when voicing concerns about certain ballots. On yet another interesting note, while Democrats poll watchers were given admission into polling areas, their GOP counterparts were not.

Taking on the deep, corrupt swamp

The Trump campaign concluded their email by stating that the aforementioned details only include just a few examples of “unprecedented” voter fraud. Therefore, the 2020 presidential election remains heavily litigated; there are also no signs that this will change anytime soon.

If Dominion Voting Systems have the ability to review votes in real time as they're coming in, that would create conditions ripe for fraud.

This warrants an investigation. @SidneyPowell1 pic.twitter.com/X927nPbUmm

These new developments arrive at a very telling time. Just earlier this month, Americans learned about a “glitch” within Dominion Voting Systems. The glitch entailed giving 6,000 Trump votes to the Biden column in Antrim County, Michigan; upon the rectification of this error, Trump received recognition as the true winner of Antrim County.

In order to keep up the fight against the corrupt swamp, the Trump campaign is going to need some help. You can donate to the Trump Election Defense Fund here.