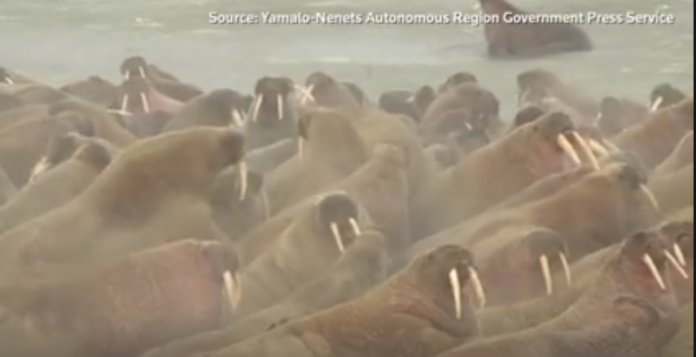 A drone captured some amazing footage of walruses gathered in the Arctic Circle on the beach of the Kara Sea,  in northern Russia last month. This is known as a walrus haulout, where large numbers of the species gather to socialize and reproduce.

The Pacific Walrus are found mainly along the shores of the Arctic Seas between Alaska and Siberia.

Aleksander Sokolov, a senior researcher at the Arctic Research Station (ARS) led a team of researchers to study the event. They were able to get within a few feet of the gathering to film from the ground.

Sokolov reported, “They are fascinatingly interesting animals. When you lay there with thousands of them and you are between them – they speak to each other, communicate, argue, maybe they exchange words of love. I seem to romanticize it, but this is exactly what it looks to me.”

It was encouraging that 3,000 of the animals were counted by the Arctic Research Station scientists. This is only a small part of the walrus habitat. Scientists and researchers fear that shrinking ice could cause a decrease in the species population.

Warmer climate cycles mean that the sea ice, where walruses traditionally haulout, is shrinking. There are also additional threats of commercial oil and gas exploration and overhunting.

At one time, walruses were the victims of commercial hunting for their blubber and their ivory tusks. This practice was banned several decades ago.

Sokolov explained, “The global warming and melting of ice in the global ocean, in the Arctic Ocean where the ice is getting thinner and it forms later and melts away earlier – all of it can not but affect the walruses.”

The walrus live an average of 40 years. Their only natural predators are the killer whale and the polar bear.

A walrus haulout with this large number of these mammals is a positive sign, it shows their population may be adapting and recovering.