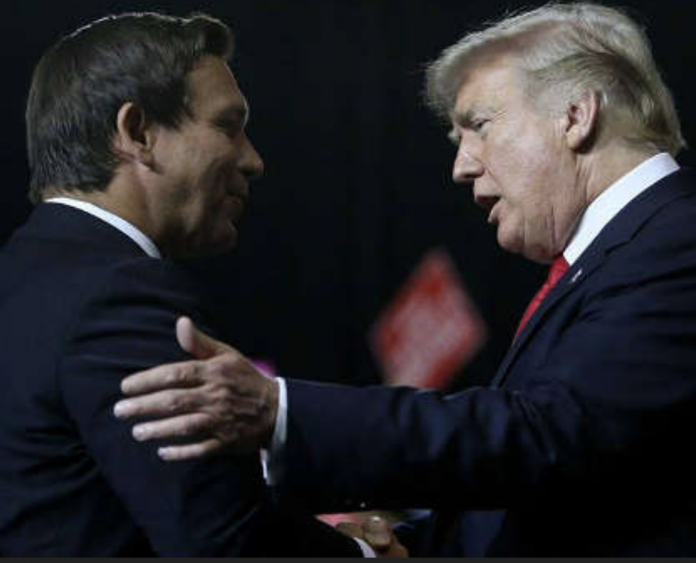 In 2024, the United States will have the chance to send Biden-Harris packing. In order to make this happen, Republicans will have to defeat Biden who has already committed to seeking a second presidential term.

This morning, former President Trump gave a bombshell interview with Fox Business. The 45th president discussed Biden’s congressional address last night, the border crisis, and a litany of other issues.

The former Republican president furthermore revealed that he’s seriously looking at another run for office in 2024. Trump then stated that if he does run, Florida GOP Governor Ron DeSantis may possibly join the ticket as his running mate.

What to know about a possible Trump-DeSantis 2024 ticket

This morning, Trump told Fox Business that DeSantis is a good friend of his and would undoubtedly be a potential VP candidate.

The former president also explained that his friendship with DeSantis goes back years. Trump noted that following his endorsement of the Florida governor, DeSantis shot off “like a rocket ship.” Trump later praised DeSantis’ leadership in the Sunshine State, noting that many Floridians are pleased with the GOP governor.

After Trump’s warm words about DeSantis, he revealed what a 2024 presidential race would entail. Trump stated that his focal points for campaigning would center around immigration, taxes, the Second Amendment, and U.S. energy independence.

Will DeSantis run for president in 2024?

Of possible 2024 GOP contenders, DeSantis’ name is right up there with Trump’s.

Neither has committed to running for president just yet; however, next month, DeSantis will travel to Pennsylvania to give a key speech. This upcoming event has triggered speculations that the Florida governor could be gearing up for a presidential run in 2024.

This morning, many Americans weighed in amid Trump’s talk of a 2024 campaign with DeSantis as his running mate. Conservatives made clear that they’d happily support this ticket; meanwhile, Democrats mocked the idea.

At this time, the Florida governor has not publicly responded to Trump saying that he’d consider a ticket with DeSantis as his running mate. However, there is plenty of time between now and 2024. The Florida governor nevertheless remains a rising star in the GOP.