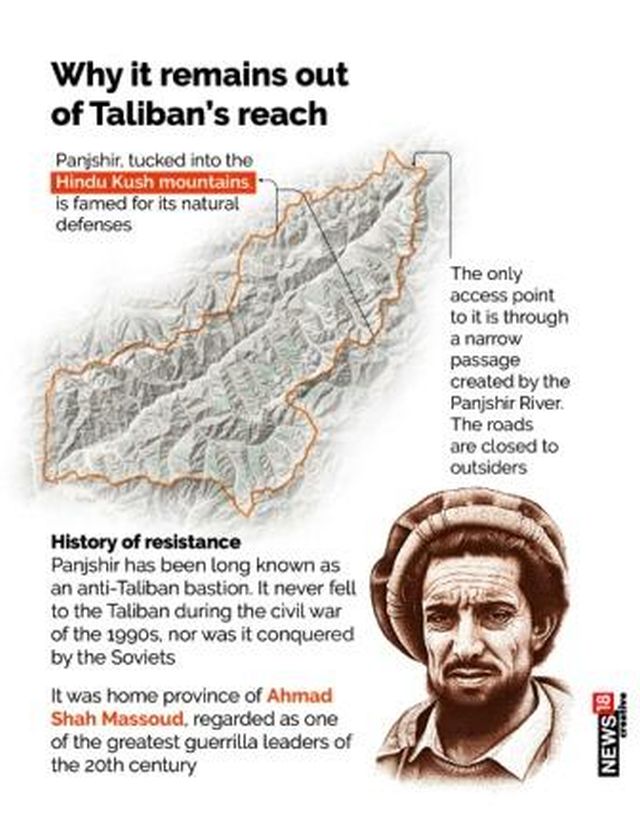 Ahmad Massoud leads the fight in Panjshir with his band of Afghan resistance fighters. Panjshir Valley is located just 77 miles Northwest of Kabul. In the last few weeks, their Army has grown from 6,000 to 10,000. And the National Resistance Army (NRA) has a wide perimeter that stretches across the valley.

All sources from Panjshir claim the perimeter is solid despite fighting off the Taliban several times in the last few days. Panjshir represents the last major territory standing between the Taliban militia and total control over Afghanistan.

As reported by NPR’s “All Things Considered” on Friday, Ali Nazary, the NRF head of foreign relations, is currently in the U.S. Nazary says he is in close contact with Massoud and Amrullah Saleh, who was vice president under President Ashraf Ghani.

The Panjshir Valley “has not been breached,” he said.  “The Taliban are facing fierce resistance.”

“The Taliban propaganda machine is trying to divert attention, is trying to spread propaganda, to weaken morale in Kabul and elsewhere,” Nazary said.

The NRF is made up of various local militias and the remnants of the Afghan army.

Their leader Massoud is the Western-educated son of the Afghan hero, Ahmad Shah Massoud. The elder Massoud commanded an army that fought off the Russians and the Taliban in Panjshir. His son’s army is gathered in the same valley today.

Saleh video on the fight in Panjshir

The RESISTANCE is continuing and will continue. I am here with my soil, for my soil & defending its dignity. https://t.co/FaKmUGB1mq

Amrullah Saleh has joined Massoud in the valley. In a video posted on Twitter, Saleh also denied rumors of a defeat.

Countering reports that he and Massoud had also fled, the former vice president told his supporters that he is in the Panjshir Valley. He says the NRF has “held ground.” He assures the world that he is still alive. And the fight in Panjshir continues.

“Fortunately, our forces bravely fought them. They repelled all of their attacks,” he said.

Panjshir has been historically difficult to defeat. The mountains provide a fortress against invaders. But without air support, it remains questionable how long the NRF can hold out.

They face a larger and better-equipped Taliban force.

Nazary said al-Qaida is joining the Taliban. And the resistance is fighting them “all alone.”

In the NPR interview with Nazary, he claims that “The whole world has abandoned us.” “We’re not receiving any type of assistance, whatever form it could be. And we’re fighting al-Qaida and international terrorism at the moment. And everyone is ignoring this.”

Although the resistance continues to fight, Nazary said, “lines of communication” are open with the Taliban. So far they have been unsuccessful in brokering a peace deal. And they really have no idea what the US negotiated before they left.

“Unfortunately, right now in their government that they’re forming, they’re ignoring 50 percent of the society, which are women,” Nazary added.

Breaking News: It was reported on Saturday that the NRF blew up a mountain in the area of the Danah after thousands of Taliban terrorists entered Panjshir. They are now trapped inside the valley. The Taliban is surrounded in the Dasht-e-Rivet area. And all their vehicles and equipment have been left behind due to the mountain blast. The Taliban is still in control of the Paryan district in Panjshir province, but their path has been cut off from Kotal Khawak.

Late in the day the Taliban is claiming to have broken through the valley and is trying to get to the Panjshir governor office. The local news agency Asvaka News is confirming the fall of the Anaba District and claim there is major fighting in an attempt to get to the leaders of the NRF.