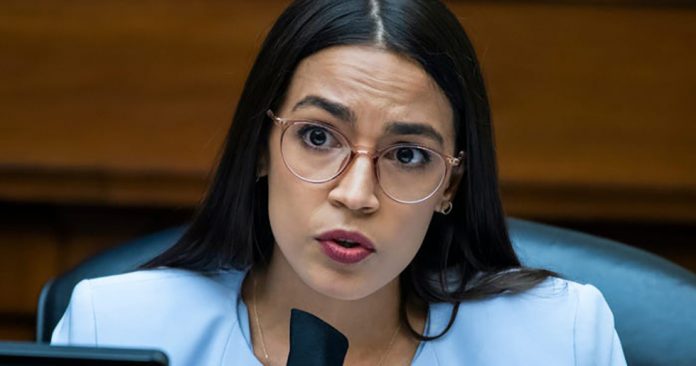 New York Rep. Alexandria Ocasio-Cortez at one time claimed that she was considering quitting politics, but now she has a new idea.

The 30-year-old says she wants the people who are at the top of the Democrat Party to quit their positions of power.

“I do think we need new leadership in the Democratic Party,” she said.“I think one of the things that I have struggled with, I think that a lot of people struggle with, is the internal dynamics of the House has made it such that there [are] very little options for succession.”

“How do we fill that vacuum? Because if you create that vacuum, there are so many nefarious forces at play to fill that vacuum with something even worse,” she said on The Intercept podcast ‘Intercepted’ in an interview that was broadcast on Wednesday.

“And so, the actual sad state of affairs is that there are folks more conservative than even they are willing to kind of fill that void,” the representative said.

But she said that she would not be willing to take on that role if House Speaker and California Rep. Nancy Pelosi, along with Senate Minority Leader and New York Sen. Charles Schumer, were given the boot.

“The House is extraordinarily complex and I’m not ready,” she said. “It can’t be me. I know that I couldn’t do that job.”

And she had some criticism for president-elect Joe Biden who, predictably, has picked a whose who of the same old same old for high level cabinet positions.

“How do you make sense of this corporate revolving door that Biden is one again activating?” she said.

“It’s horrible and I think it’s part of a larger issue that we have right now which is there’s a lot of talk about ‘Oh, you know the Biden administration is bringing back a lot of Obama appointees’ which depending on where you are in the party, may sound nice I guess but I think what a lot of people fail to remember is that we now have a Biden administration that’s bringing back a lot of Obama appointees.

“But when Obama was making appointments, he was bringing back a lot of Clinton appointees and so this is not just a revolving door of private industry.

“It’s a revolving door of just the same people for the last 10, 20, 30 years in a time when this like emerging populism – and one of the main reasons — and a huge reason we got Donald Trump in the first place in addition to just the racism that was waiting to be reanimated in this country is just an extreme disdain for this moneyed, political establishment that just rules Washington, D.C. no matter who you seem to elect,” she said.