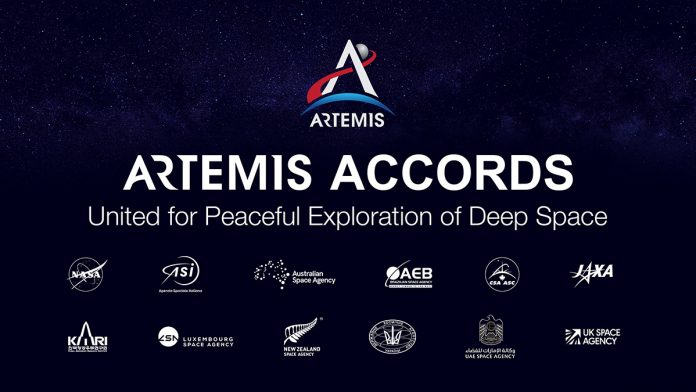 So far 21 countries have signed the Artemis Accords. The contract was drawn up to deal with the practical and legal challenges of a return by humans to the moon.

The Artemis Program aims to send crewed missions to the moon by 2024. And to establish a manned lunar base by 2030.

The treaty was developed during the Trump administration in May 2020. The US developed and signed the Artemis Accords. And the United Kingdom, Italy, Australia, Canada, Japan, Luxembourg, and the United Arab Emirates were the initial signers. Ukraine signed the contract days later.

The Artemis Accords codify the key principles and guidelines for future exploration and colonization of the Moon. As much as possible the outline of operating principles and international collaboration is detailed in the space law contract.

In 2021, South Korea, New Zealand, Brazil, Poland, Dubai, and Mexico signed. And this year Israel, Romania, Bahrain, Singapore, Columbia, and Saudi Arabia signed. France also signed in June 2022. Since France is the largest contributor to the European Space Agency its signature is important.