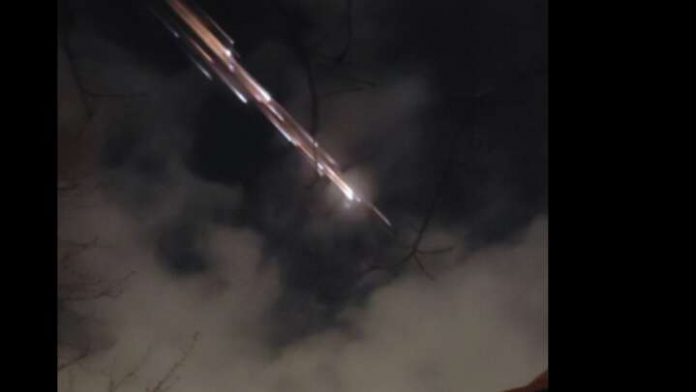 Shortly after 9 PM PST on Thursday, a flurry of reports from Seattle appeared across social media. Citizen-journalists were capturing dramatic videos of an object slowly sparkling as it streaked across the night sky. And many suspected it might be a meteor show or even an alien ship. It was space junk!

Can someone please tell me what I just witnessed here #westseattle pic.twitter.com/AAkStf8QfE

Real-time reporting from the Capitol Hill Seattle Blog captured the reactions of witnesses who weren’t sure if the streaking light show was a meteor shower or an alien invasion.

Jonathan McDowell, an astrophysicist at the Harvard-Smithsonian Center for Astrophysics, may have been the first to identify the display. He said it was a wayward SpaceX rocket burning up on reentry after it “failed to make a de-orbit burn.”

“So what people saw was this 3-ton rocket stage melting and breaking into lumps as it zoomed at 17,000 miles an hour. Pretty much horizontally overhead, about 30 or 40 miles up, and it just disintegrates and falls apart,” Astronomer Jonathan McDowell explained.

The discarded Falcon 9 rocket had been orbiting the earth since it launched 60 Starlink satellites on March 4th.

22 days later the stage 2 rocket which had failed to make a deorbit burn returned. And when it was re-entering Earth’s atmosphere and burning out in the night sky.

#BREAKING UPDATE: This is new video just in from KOMO News viewer Amy Warren from West Seattle showing what @NWSSeattle now says is the debris from a Falcon 9 rocket 2nd stage that did not successfully have a deorbit burn. pic.twitter.com/TOtvPDwA2w

The cost of a Falcon 9 second stage is around $10 million. McDowell estimates when the rocket appeared it was 60km or 40 miles up. That’s just on the edge of low earth orbit and 30 miles higher than planes fly.

My son in-law Brent Marshall captured this video over football field in Wilsonville, OR #falcon9 ? pic.twitter.com/2xYGWjLRBo

Hundreds of videos capture the event

SpaceX and NASA anticipated this failed rocket would reenter the earth’s atmosphere. They knew it would be Thursday, but they could only give the event a 5-hour window.

McDowell tweeted out, “But remember it’s going 17000 mph, so a 5 hour time uncertainty means an 85,000 mile (53000 km) location uncertainty. This is more than one entire loop around the Earth. That’s why we couldn’t tell in advance it would be the Seattle area that would see the reentry.”

“Why can’t we predict it better? Partly because of the headwind is causing it to spiral in, the Earth’s upper atmosphere has weather – even hundreds of miles up. Solar activity affects its density.”

Another great video of the Falcon 9 #Starlink (it failed to complete a de-orbit burn, hence the exciting light show) as it made re-entry over the Pacific Northwest tonight. Nice that we cleared out tonight, or we would've missed it!#SpaceDebris #SpaceJunk #WAwx https://t.co/iFAAcBykmf

So far this year, there have been 14 pieces of “space junk” of 1-ton or larger, which have re-entered the Earth’s atmosphere.  Most of the time they go unnoticed because it’s daytime or they show up over an ocean.

Space is busier than ever before. In the last three years, SpaceX has set aggressive launch schedules and activity is only going to increase. There are currently almost 4,000 satellites in-service. Three years ago there were only 1,000.

Don’t be surprised if you see some space junk falling in your area soon!