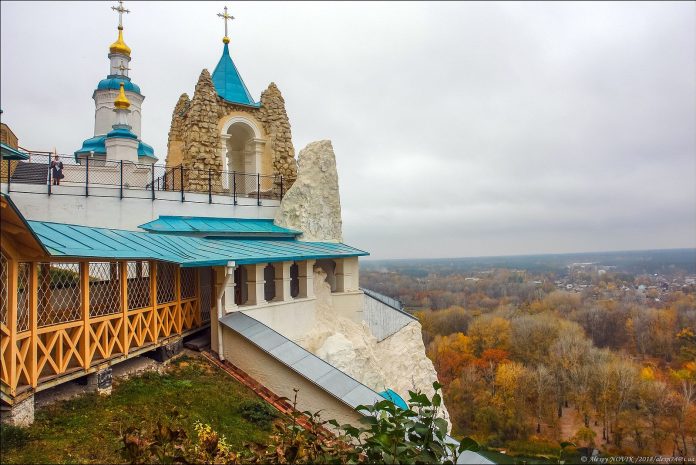 On June 4th, Russian artillery struck the Sviatohirsk Lavra also known as Holy Hill in its latest and most devastating attack. The fire destroyed the Vsikhsviatskyi Skete (All Saints’ Hermitage), an all-wooden chapel that was consecrated in 1912.

The bombing comes days after the Ukrainian Orthodox Church (UOC) formally severed ties with Putin’s church in protest of the war. And during a time when Putin is being accused of Soviet-style cultural genocide as the Russians continue to target civilians and churches.

The Sviatohirsk Lavra has been under fire from Russia since May.

And on June 1st, Russian shells exploded in the living cells of the Lavra monks. Four were killed and four others seriously injured in the targeted bombing.

A part of the stated mission of the United Nations is to protect civilians and preserve the historical monuments and social infrastructure in every member state.

“The occupiers know exactly what object is being shelled. They know that there are no military targets on the territory of the Sviatohirsk Lavra.

They know that about 300 civilians are hiding from hostilities, including 60 children. But still, the Russian army is shelling the Lavra like the whole of Donbas, like any other territory and any other object of Ukraine that can be reached, they don’t care what they turn into ruins.

On 31 May, the Verkhovna Rada of Ukraine appealed to UNESCO to deprive Russia of its membership in the organization. Ukrainian diplomacy is consistently working on this.

No country other than Russia has destroyed so many monuments and cultural and social sites in Europe since World War II.

Every church burned by Russia in Ukraine, every school blown up, every destroyed memorial proves that Russia has no place in UNESCO. What can we talk about with a barbarian state, with a terrorist state? About which artillery shells are better for destroying historical heritage?

We expect a logical and fair response from the UN and UNESCO. It is the United Nations, and its Statute does not assume uniting with terrorists. Russia’s isolation must be complete, it must be held accountable for its crimes.”

What is the Holy Hill aka Sviatohirsk Lavra?

The Sviatohirsk Lavra also known as the Sviatohirsk Cave Monastery is an Orthodox Christian monastery in Donetsk Oblast (province) of eastern Ukraine. It is a cluster of breathtakingly beautiful religious buildings with unique architecture.

And includes the now destroyed  Vsikhsviatskyi Skete (All Saints’ Hermitage), several chapels, stores and buildings where the monks live and work.

The name Sviatohirsk Lavra comes from the name of the hill upon which the monastery was built. Loosely translated it means Holy Hill.

It was built in the 14th century. And has been damaged and restored several times.

The monastery was destroyed in the 1930s during the Soviet purges of cultural and religious attractions throughout the Soviet Union.

After Ukraine gained independence with the fall of the Soviet Union in 1991, the monastery was restored and rebuilt. In 2004, the Ukrainian Orthodox Church restored the monastery to its status as a Lavra. Today, there are more than 100 monks living at the site.