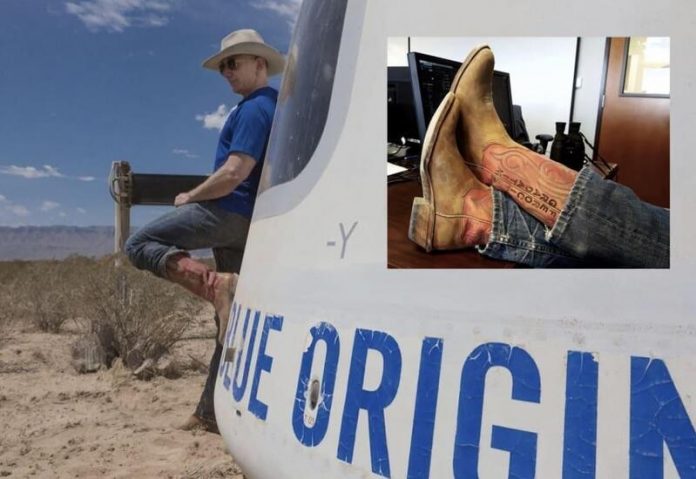 First Bezos complained to the Government Accountability Office (GAO). Then he begged in a very public letter to NASA, offering to slash the project bid. Then Bezos sues NASA.

It is feared the former CEO of Amazon and a recent space tourist may be slowing down NASA’s progress on the mission. And the Human Landing System is a vital part of the Artemis mission. It will be used to land humans on the surface of the moon.

We haven’t had a crewed landing on the moon since the days of the Apollo missions. And Artemis is supposed to be another historic moon landing. The original timeline was to have the human lander touching down on the moon’s south pole in 2024.

Blue Origin petitioned to have the complaint sealed. But there is a leaked version of his lawsuit. Blue Origin is claiming NASA’s evaluation of the bids and proposals for the Human Landing System was “unlawful and improper.”

“Blue Origin filed suit in the U.S. Court of Federal Claims in an attempt to remedy the flaws in the acquisition process found in NASA’s Human Landing System,” a Bezos spokesperson told the press. “We firmly believe that the issues identified in this procurement and its outcomes must be addressed to restore fairness, create competition, and ensure a safe return to the moon for America.”

The Elon Musk-owned company submitted a bid of $2.9 billion. Bezos’s bid was more than double. SpaceX also has a great track record in space. And it was his company’s success that opened the door to privatize the industry. NASA awarded the original contract in April to SpaceX.

A few weeks later, both Blue Origin and Dynetics, who also submitted a lunar landing bid, filed separate protests with the GAO.

On Aug. 10 the GAO  handed down a 76-page decision denying both protests. The review upheld NASA’s decision. And said, “the [contract] announcement reserved the right to make multiple awards, a single award, or no award at all.”

So GAO confirmed NASA was well within its rights. SpaceX was entitled to the human lunar landing contract. After all, Blue Horizon is way behind in the space race. And their bid for the contract was way too high in the first place.

On Monday, Bezos’ attorneys filed a complaint in Federal court.

A NASA spokesperson says that “officials are currently reviewing details of the case.”

Bezos has also started a social media campaign attacking SpaceX and belittling NASA’s decision to use them for moon missions. The infographic campaign is very like the one he waged against Richard Branson when Virgin Galactic was able to jump ahead of  Bezos in space tourism.

This new Federal lawsuit shows that Jeff Bezos’ is not backing down. And that he doesn’t care what anyone thinks.

Since he was not able to compete effectively he will litigate, lobby and attack. It appears that Bezos is so disappointed he didn’t get the contract he is willing to try and keep NASA  grounded.