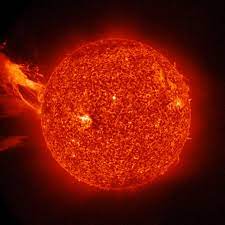 A large solar flare appeared on the sun to usher in the 4th of July fireworks on Earth. The sun event originated from a sunspot named Active Region 2838 (AR2838) at 10:29 EST on Saturday, July 3rd.

The large sunspot had a flare which was registered as a class X1.5 on the scale NASA uses to track sun events. The area affected has since rotated to the far side of the sun.

This sun eruption was the largest since 2017. The 2017 sunspot appeared in  AR 2192 and was about the size of Jupiter. It remains the largest solar flare observed in 24 years.

Sunspot AR2838 where Saturday’s flare appeared is a new active region on the sun. This sunspot region actually developed over a 12 hour period. It created an M2 flare (R1-Minor Radio Blackout.

A video of the solar flare from NASA’s Solar Dynamics Observatory shows the flare erupting from the upper right limb of the star as seen by the spacecraft, one of many used to monitor the sun’s weather.

“As quickly as it appeared, the sunspot is already gone,” Spaceweather.com reported on Sunday. “On July 4th it rotated over the sun’s northwestern limb, and will spend the next two weeks transiting the far side of the sun.”

The sun marks the heart of our solar system. It is over 99% of the mass or over 100 times the diameter of Earth. Researchers estimate about one million Earths could fit inside the sun.

The surface of the sun is on average 10,000 degrees Fahrenheit (5,500 degrees Celsius) hot. But temperatures at the sun’s core reach more than 27 million F (15 million C). This heat is generated by a series of nuclear reactions. According to NASA, it would take 100 billion tons of dynamite exploding continuously to match the energy produced by the sun.

The sun’s weather has active phases and years of relatively quiet solar activity. These are 11-year cycles. The current cycle “solar cycle 25” started in 2020.

Because of the possible impacts to us, NASA scientists constantly monitor sun activity from the Space Weather Prediction Center (SWPC), a U.S. facility responsible for tracking the weather on the sun.