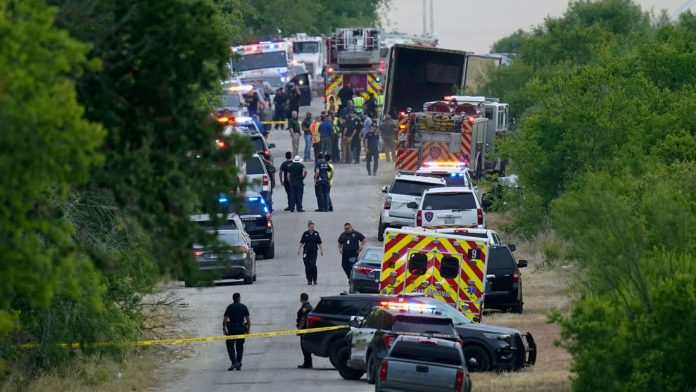 At least 46 migrants were found dead in an enclosed 18-wheeler in San Antonio on Monday. Amid the border crisis, the Texas tragedy continues to unfold with 12 adults and 4 children hospitalized.

UPDATE: As of June 28th, the number of migrants that have died is 50.

This incident is the deadliest case of human smuggling on U.S. soil. Until now, the worst was in May 2003, when 19 migrants died in the rear compartment of an 18-wheeler in South Texas.

In November 2021, a man was sentenced to nearly two and a half years in prison for smuggling illegal aliens from Laredo, Texas, in a tanker truck to San Antonio.

In April 2022, 76 migrants were found jammed into the back of a truck along with a large stash of drugs in rural Dimmit County.

One official said that authorities believe that the bodies were those of migrants, according to The Texas Tribune. https://t.co/QfPPFjZZ4X

The tractor-trailer was located just off I-35 where it had pulled onto a service road running parallel to some railroad tracks.

The I-35 corridor is known to be a major transit route from the US-Mexico border. And is used often by human traffickers and drug smugglers.