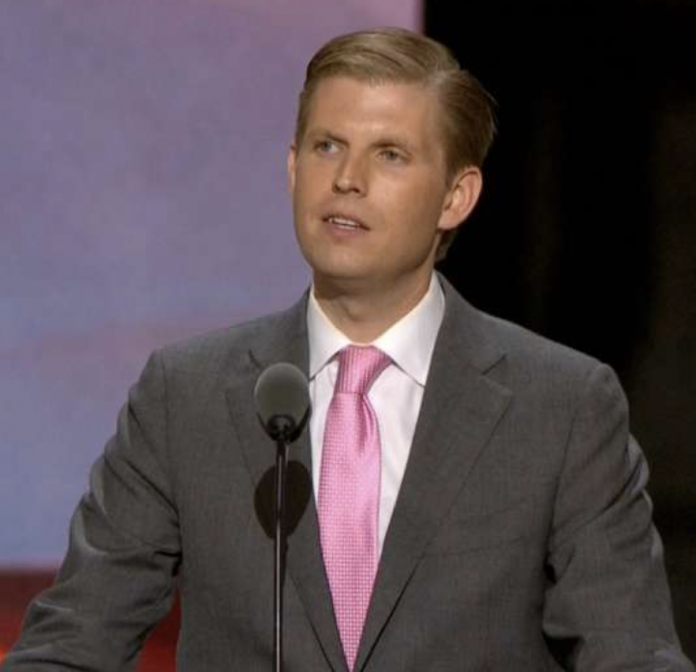 Eric Trump, the second eldest son of President Donald Trump, was spat on by an employee at a Chicago lounge last night. This incident comes as the 2020 presidential election begins to heat up.

What Happened to Eric Trump in Chicago?

Eric and a group of friends went into the upscale Aviary to presumably have a drink or dinner. However, none of the entourage expected an employee of the Aviary to walk up to Eric and spit in his face. Of course, following this incident, Secret Service took the unnamed, female employee into custody. Despite this occurrence, Eric chose not to press charges against the woman; therefore, Secret Service released her on her own recognizance.

CPD was on scene and assisting the United States Secret Service with a law enforcement matter. Any and all inquiries regarding a federal protectee must be directed to the Secret Service. https://t.co/ecq5TaMiQ0

Shortly after the events which transpired, Eric spoke on the phone with Breitbart News. The second eldest Trump son noted the “sickness” of what happened and called it desperation, as the opposing side knows they’re losing.

In Eric Trump’s own words:

“It was purely a disgusting act by somebody who clearly has emotional problems. For a party that preaches tolerance, this once again demonstrates they have very little civility. When somebody is sick enough to resort to spitting on someone, it just emphasizes a sickness and desperation and the fact that we’re winning.”

Always love visiting ⁦@TrumpChicago⁩! It is one of the most beautiful buildings in the world! ⁦@TrumpHotels⁩ pic.twitter.com/vr60sbbb07

Since President Trump’s time in office, various prominent conservative figures have faced public harassment and mistreatment. Many openly pro-Trump individuals are chased out of restaurants, refused service, and even subjected to protesters appearing outside their homes. Amazingly, the people who participate in these acts feel justified in doing so. Those who lean right of center are often branded as racist and hateful, even when the facts simply don’t support this narrative.

As the 2020 presidential election intensifies, more incidents like the one Eric Trump faced might occur. In many regards, politics has a tendency to bring out the worst in certain individuals. More specifically, those on the far-left have demonstrated their acceptance for harassing people who dare to support the president or even wear a red MAGA hat.

At this time, there is no word as to whether or not the woman who spat on Eric Trump will remain employed at the Aviary. However, prominent progressives have not come out to condemn the act which transpired last night. Only time will tell whether or not this changes.

Hearing of incident at Aviary tonight, an employee allegedly spit on son of @realDonaldTrump who is visiting Chicago, offender now in US Secret Service custody