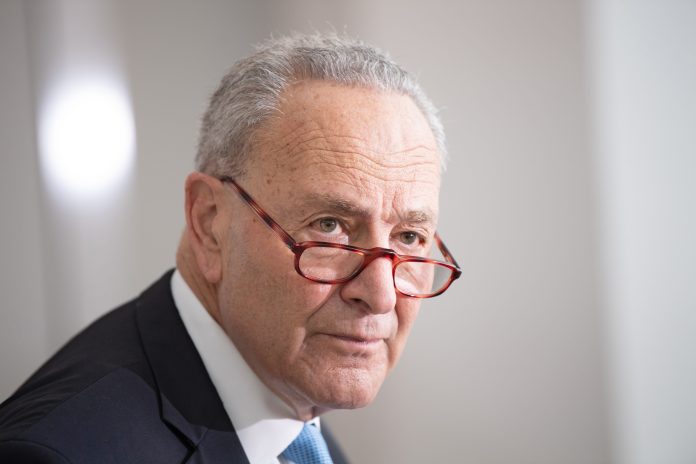 Chuck Schumer is the Senate Majority Leader and one of the top Democrats in Congress. Like other leading leftists, he’s working to pass the Biden agenda through Congress and onto the president’s desk so it can get a signature and become law.

As Schumer works to advance the president’s destructive agenda, he’s also trying to ward off challengers so he can remain in office. Schumer, despite having decades of time spent in Congress, is not exactly a popular politician.

Many people would be happy to see Schumer go, especially Republican Adam Laxalt, who is running against the Senate Majority Leader in the 2022 midterms. Schumer’s fixation with removing the threat Laxalt poses caused him to land in some hot water.

Busted for spreading lies about Laxalt

The Senate Majority Leader sought to convince voters in Nevada that his Republican opponent opposes lowering the fees of prescription drugs for the elderly. Schumer also used his super PAC to falsely declare Laxalt as against child tax credits.

Needless to say, spreading these lies did not over the way the Senate Majority Leader apparently thought it would. In fact, the ad ultimately got taken down; this happened after the National Republican Senatorial Committee threatened legal action if the ad remained up.

Laxalt himself also weighed in on the matter. The Republican stated Schumer will go to any measures to win an election. Laxalt also stated for this reason, the voters cannot trust a word that comes from the Senate Majority Leader.

A red wave coming to America?

With months of Democrats having control over the federal government, there is a multitude of problems to show for it. Many Americans believe due to Biden’s consistently declining approval ratings, Republicans will take back Congress in 2022.

Furthermore, the Virginia gubernatorial election is looking more likely to turn out in the favor of Republican Glenn Youngkin. At this time, it’s too early to tell; Election Day in Virginia is Tuesday, November 2. However, new polls already have Youngkin leading his Democrat opponent.

Chuck Schumer has not come out with a public statement about the removal of his ad due to false information.