The stock price of Crowdstrike Holdings (NASDAQ: CRWD) skyrocketed during its initial public offering on Wednesday. 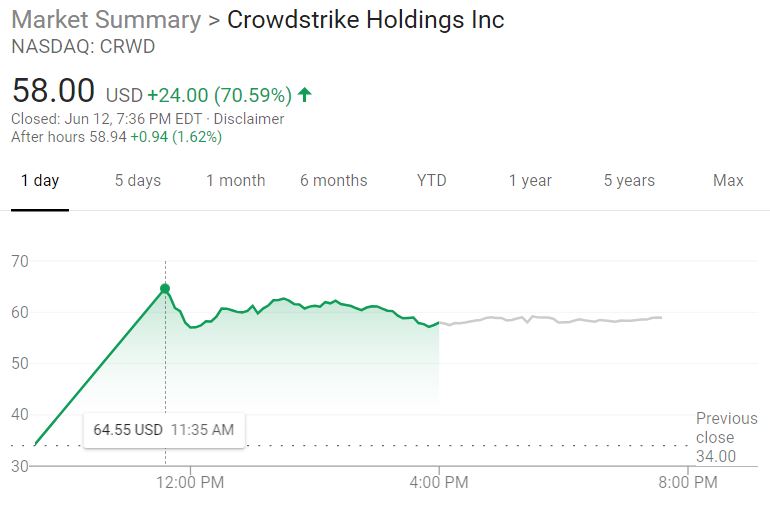 The security software vendor priced its IPO at $34 per share—higher than its price target of around $28 to $30 per share. It offered to the public 18 million shares of its Class A Common stock.

The security software vendor’s investors are obviously optimistic about its future given its financial performance. Its annual recurring revenue (ARR) consistently grew from $59 million in Q4 FY17 to $313 million in Q4 2019. Its subscription YoY growth rate is 137 percent and dollar-based net retention rate is 147 percent.

“Some of the world’s largest enterprises, government organizations, and high profile brands trust us to protect their business,” according to Crowdstrike in its Form S-1 Registration Statement to the Securities and Exchange Commission (SEC).

In an interview with CNBC’s Squawk Alley, Crowdstrike CEO George Kurtz said, “There’s been no Salesforce of security. We think we’ve taken the right approach and created the right architecture to be that fourth pillar of cloud computing.”

In a separate interview with CNN, Kurtz emphasize that the company competitive because of its ability to prevent data breach. He said, “Preventing a breach is much more important than preventing malware.”

Kurtz explained that stopping malware is also important and it is a subset of a data breach. He added that Crowdstrike is “providing an incredibly valuable technology and service in area where the landscape is ever evolving”

Furthermore, Kurtz believe that Crowdstrike has significant growth opportunities in the cloud. He noted that companies and governments embrace the cloud for their legacy technologies.