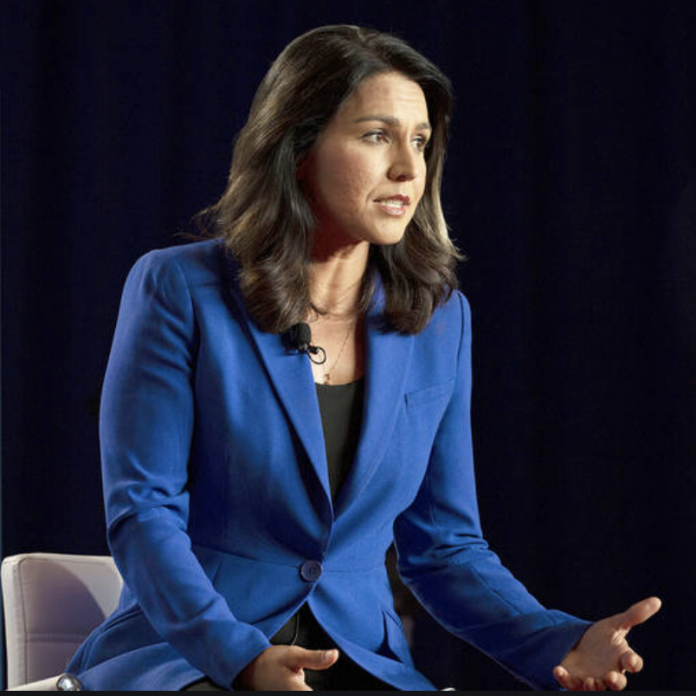 Over the past few years, the Democrat Party has chosen to embrace policies and individuals who are troublingly radical. Some of the most far-left positions to date include, but are not limited to, abolishing ICE, abolishing DHS, keeping children in school for ten hours per day, etc. Furthermore, two of the leading candidates within the 2020 Democrat primary race are Elizabeth Warren and Bernie Sanders.

Both Warren and Sanders are so far-left that it’s absurd. To make matters worse, as the Democrat Party rallies behind extremists, they shun moderates, such as 2020 Democrat Tulsi Gabbard.

The Black Sheep of the Democrat Party

Despite Tulsi Gabbard’s service to America as an Army National Guard member, Democrats constantly question her patriotism and loyalty to the nation.

The New York Times and CNN have each branded Gabbard as an “Assad apologist” and an asset of Russia. This is something which the 2020 Democrat called both publications out for during the fourth Democrat debate.

Likewise, Hillary Clinton, one of the Democrat elites, also referred to Gabbard as a “favorite of the Russians.”

Then, Clinton alleged that Gabbard is being “groomed” by the Russian government to run interference in the current presidential election.

Despite the lack of evidence to support Clinton’s accusations, many leftists ran with them. Left-wingers Sunny Hostin and Joy Behar, both co-host of The View, backed Clinton’s assertions before calling Gabbard a “trojan horse” and a “useful idiot.”

Bringing About Their Own Demise

The Democrat Party isn’t doing themselves any favors by treating one of the few reasonable members of their party so poorly.

If the left condemned the radicalism of Warren and Sanders even half as much as they do Gabbard, their party would be much better off.

Contrary to what the left may think, accusations of radicalism and extremism are not just right-wing talking points. Calling to abolish the Department of Homeland Security is radical. Stating that billionaires should not exist is radical.

If Democrats persist on their current course of action (which they inevitably will), their party will only go further down the drain. It’s quite an unfortunate sight to see; a major political party in this country should never embrace policies and candidates which are so inarguably anti-American.

The 2020 election is less than one year away. In less than 365 days, Democrats will wonder why they lost yet another presidential election. The left is doing more damage to themselves than any Republican could ever dream of doing.