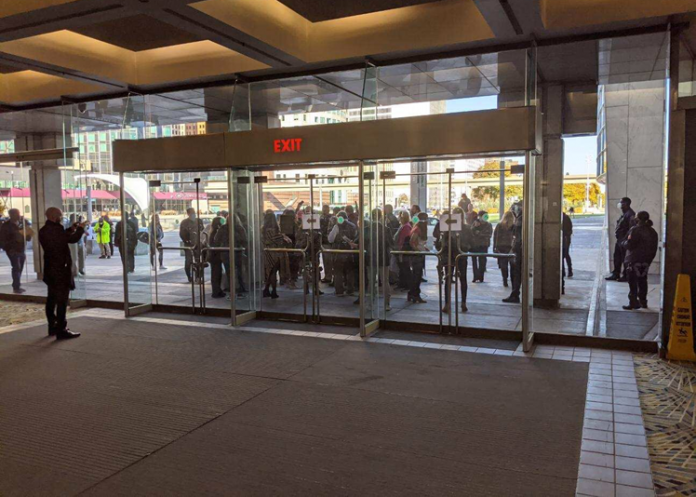 Election officials in Detroit, Michigan refused to allow dozens of Republican vote challengers to re-enter the TFC Center and observe the ballot-counting process.

Detroit election officials told Republican vote challengers that the area is already overcrowded and could no longer let people in. The decision strengthened their belief that there is an irregularity in the ballot-counting process and demanded that election officials “stop the vote” count.

Michigan Trump Victory Deputy State Director Drew Thompson tweeted images and a video of what was going on at the TFC Center. According to him, President Donald Trump’s supporters were upset for being locked-out and chanted “let us in” and “stop the vote.”

He wrote, “Detroit election officials are currently refusing to let the public observe the counting process at the TCF center, have padlocked the doors. This is a disgrace to the democratic process.”

Detroit election officials are currently refusing to let the public observe the counting process at the TCF center.

They have padlocked the doors.

This is a disgrace to the democratic process. pic.twitter.com/usZckeVjdu

The media already projected that the president’s opponent will win Michigan. The Trump campaign filed a lawsuit to stop the ballot-counting across the state, arguing that they weren’t given enough access to multiple counting locations.

In a statement, Trump campaign manager Bill Stepien said, “President Trump’s campaign has not been provided with meaningful access to numerous counting locations to observe the opening of ballots and the counting process, as guaranteed by Michigan law. We have filed suit today in the Michigan Court of Claims to halt counting until meaningful access has been granted. We also demand to review those ballots which were opened and counted while we did not have meaningful access.”

The news of the lawsuit encouraged more Republican vote challengers to protest the ballot-counting process in that location.

The crowd outside is getting larger and these people are still being refused entrance to observe the counting process.

What are they hiding?? pic.twitter.com/Dj46uZ1X9z