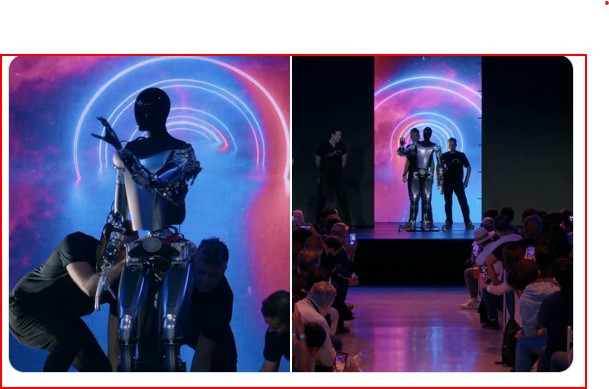 SpaceX and Tesla CEO Elon Musk unveiled the prototype of its own unique Tesla-bot. It is a humanoid robot named Optimus.

Musk predicted that the electric vehicle (EV) company would produce millions of robots in the next 3 to 5-years.  And they would be able to sell them for under $20,000.

Musk has been teasing the AI creation since August 2021. And he’s been talking about AI forever.

He believes the Tesla-bot business will ultimately be bigger than Tesla’s EV revenue.

The company is pushing to finalize the design, build, and mass production of the robots. And there are plans to beta test the “Optimus” by using the robot to work jobs in Tesla factories.

Musk described how important it is to have Tesla become a leader in AI. He wants to do more than just make “cool cars.”

“As you know, last year it was just a person in a robot suit but, uh, we’ve come a long way, and compared to that it’s going to be very impressive,” Musk announced.

“There’s still a lot of work to be done to refine Optimus and prove it,” Musk admitted.

The current Tesla-bot was rolled out on the stage waving to the audience. Musk explained that it would be able to walk in a few weeks.

“I think Optimus is going to be incredible in five or 10 years like mind-blowing.”

A video was shown of Optimus performing simple tasks. The robot was filmed at Tesla’s California facility, watering plants, carrying boxes, and lifting metal bars at a production station.

Then Tesla engineers gave presentations explaining the science behind the Tesla-bot.

According to Tesla ads, “Optimus (you know, like the transformer) will someday help out every-day Americans with their household chores and will be an affordable product that most people can buy.”