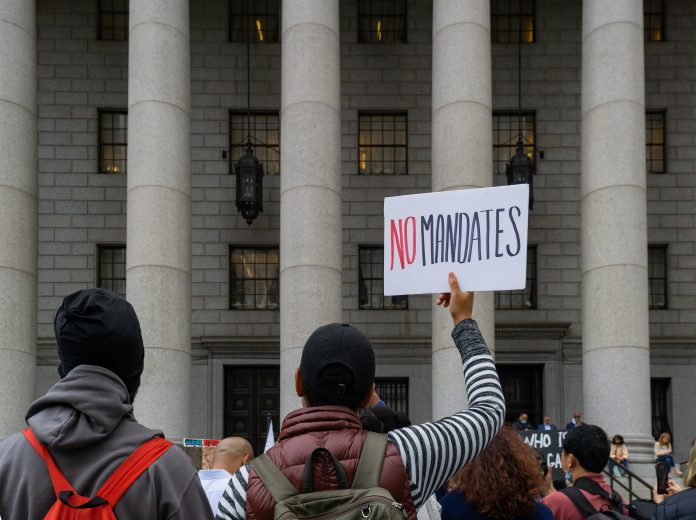 Battles over COVID vaccine mandates are heating up. Many first responders, police officers, and other employees are deciding not to bow down and go along with the mandate.

Some are engaging in lawsuits to have vaccine mandates legally overturned; others are letting themselves be fired and/or engaging in walk-outs to make their voices heard.

Peaceful protests are also popping up across the nation; recently, Southwest Airlines backed down from its original policy that would have unvaccinated workers pushed into unpaid leave while seeking out exemptions from the mandate.

On Thursday, President Biden mocked Americans who have concerns about the vaccine mandate’s implications on freedom. After mocking freedom, the doddering president declared that workers should be cast into unemployment if they fail to take the COVID vaccine.

However, earlier this week, the Federal Reserve released a sobering take on COVID vaccine mandates.

Relevant remarks from the Federal Reserve

In the Federal Reserve’s Beige Book, the body made some serious points that all Americans should heed. Per the Federal Reserve, vaccine mandates (along with issues concerning childcare) are driving high turnover rates as more employees retire or seek work elsewhere.

This is furthermore worsening the supply chain issues and projected shortages in police departments nationwide. For instance, cities like Seattle and Chicago are gearing up to lose considerable amounts of law enforcement if they fire unvaccinated workers.

Ironically, these cities are most in need of police presence; yet, they’re treating this situation as if police are a dime a dozen. This will not bode well for the residents of these communities.

A turning point in the COVID vaccine mandate debates

This resulted in the city of San Francisco shutting down In-N-Out; however, some people have suggested the burger joint should move to a red state. Likewise, the state of Indiana has reached out to Chicago police officers, offering them jobs if the city of Chicago fires them over the mandate.

Many Americans are willing to do whatever is necessary to resist this tyrannical, medical mandate.