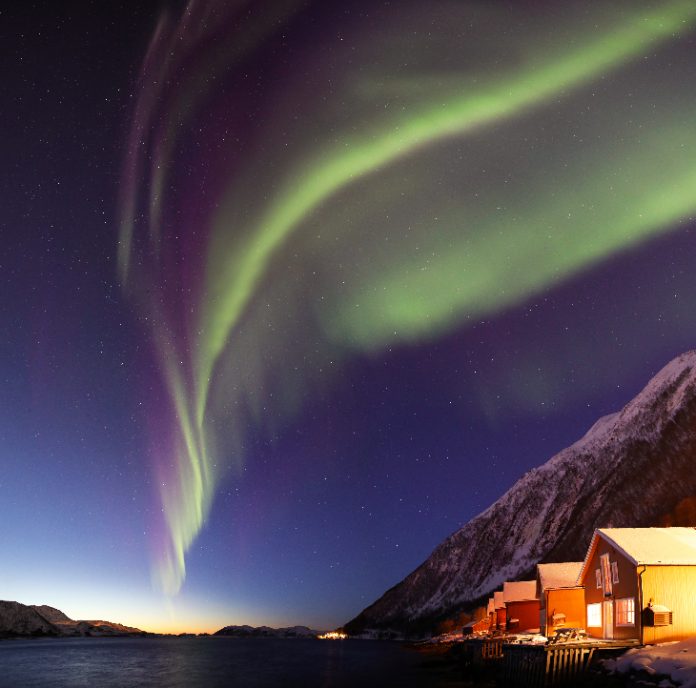 On Saturday a powerful solar flare erupted, and the results were seen on Earth Wednesday. It was ranked as a “moderate” geomagnetic storm by the National Oceanic and Atmospheric Administration (NOAA). And the afterglow was visible.

UPDATE: SpaceX Elon Musk announced that the geomagnetic storm-damaged 40 of the Starlink satellites launched last week. The damaged satellites will burn up in Earth’s atmosphere as they fall from low orbit space.

The solar flare released a coronal mass ejection coming from a sunspot named AR2936. The sunspot was increasing in size for two days before the solar flare occurred. SpaceWeather.com reported that the spot was big enough to “swallow our planet five times over.”

It was classified as an M-class flare. And this meant the initial geomagnetic storm shock could cause radio blackouts in the polar regions of Earth. If a storm is ranked an X-class, it means there is a high risk of planet-wide blackouts.

On Monday, NASA sent out a G2 storm watch for Wednesday.  NOAA said the storm is weakened to a G1 level on Thursday.

The storm hit Earth’s magnetic field on Feb. 1st. And on February 2nd the afterglow effect was seen in areas of the Earth. Photographer Marcus Åhlund took photos over Tromsø, Norway to capture the glowing sky. He took pictures at 5 pm local time.

What is a geomagnetic storm?

A geomagnetic storm happens after a solar flare. But the energy exchange from the sun must be powerful enough to reach low-orbit space surrounding Earth. It creates a geomagnetic storm within solar wind, according to NOAA.

These type of space storms can heat the ionosphere, where Earth’s atmosphere meets space. This afterglow effect has been known to cause beautiful auroras seen from Earth.  Particles from the solar flares interact with Earth’s magnetic field, and the atmosphere to cause the glowing red and green colors that fascinate sky-watchers and space scientists.

The northern lights, known as aurora borealis, are visible to stargazers in strategic spots in the U.S and the far North and South parts of the globe. And it was clearly seen and photographed over Norway.

This week’s geomagnetic storm was “moderate.”  It wasn’t strong enough to disrupt power grids or satellites. And is deemed an “auroras only” event.