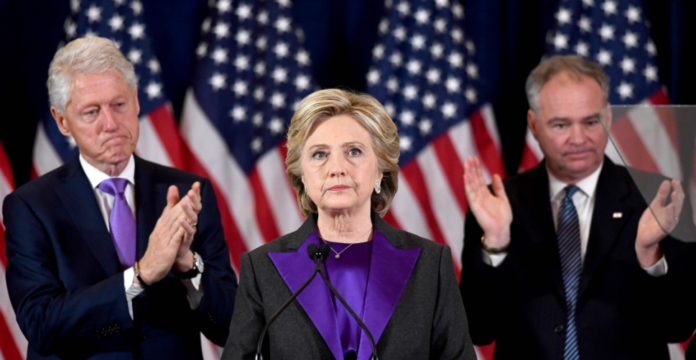 Some people simply don’t know when to quit. Sadly, failed candidate Hillary Clinton is one of those people. Investors reports during an interview with the National Public Radio, Clinton stated that she will not rule out the possibility of contesting the legitimacy of President Trump’s victory. Each day, this woman makes America happier and happier that we did not elect her.

Each time Clinton opens her dreadful mouth, she simply demonstrates what a massive, flagrant hypocrite she is. On October 24, 2016, Clinton slammed Trump as a “danger to our democracy” because of what she perceived as his potential refusal to accept the election results.

Seeing the manner in which the tables have turned is enthralling, to say the least. Clinton had no problem as the self appointed arbiter of right and wrong when she thought she was winning the election. When she thought the fix was in, she preached from her high horse like the world has never seen. Now that the tide has changed, so has Clinton.

All of a sudden, she has absolutely no regard for the safety of America’s democracy. In all fairness, she never did. Her aforementioned condemnation of the soon-to-be President Trump was merely an empty soundbite. This woman fancied herself as entitled to the Oval Office. Her failure to win the election is her own fault, and arguably karma for all the corruption and people she screwed over on her way to Democratic elitism.

Grow Up and Go Away

Americans are sick of Hillary Clinton. As Judge Jeanine pointed out in her epic Clinton takedown, people refused to vote for Clinton simply because they did not like or trust her. This is a reality she needs to face. It’s not about America’s so called unreadiness for a woman President. It’s not because successful, accomplished women are viewed less favorably. Clinton did this to herself.

Moreover, recent excerpts from her excused filled memoir, ‘What Happened’ revealed the utter contempt Clinton has for Americans, especially women who did not vote for her. First, she claims men conned white women into not voting for her. Then, she affirms her lack of absolution for people who didn’t support her. This entitled, narcissistic woman wrote about people coming up to her and apologizing. She then goes on to essentially state that it’s not her job to make them feel better.

Ladies and gentlemen of America, this is Hillary Clinton. She is reprobate, unethical, and unlikeable. Her admission of willingness to contest the election results merely highlights her utter hypocrisy. Each day, the people of this nation wake up, we thank ourselves that Hillary Rodham Clinton will never ever be President.