The New York Police (NYPD) arrested three congressmen including Raúl Grijalva of Arizona on civil disobedience charges during an immigration rally.The arrests happened outside the Trump Tower on Tuesday

The police also arrested Luis Gutierrez of Illinois and Adriano Espaillat of New York.   Melissa Mark-Viverito, the speaker of the New York City Council and six others demonstrators were also taken into custody.

In a post on Facebook, the Arizona lawmaker said, “I stood in front of Trump Tower today with a whole lot of DREAMers, immigrants, and Americans to say enough to Trump and his criminalization of our immigrant communities.”

Some people supported while others condemned Grijalva. Below are some of the comments to his post. 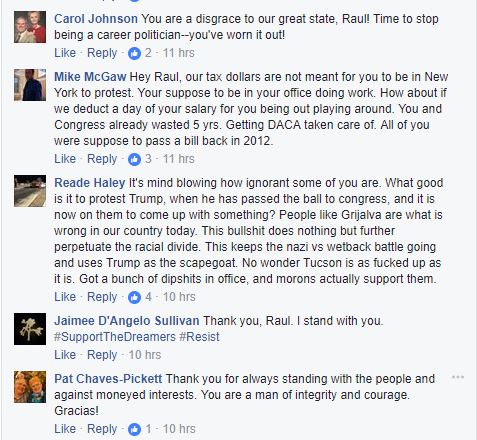 Fight for immigration will continue

On the other hand, Cong. Gutierrez said they will continue to fight for Dreamers and immigrants peacefully. They are taking the necessary steps to make that clear to the President, the Republicans, and the Democrats. He added that they will continue “as long as it takes to enact legislation and put Dreamers in a safe place.”

Meanwhile, Cong. Espaillat showed his dedication to protecting immigrant, their families and future in America, according to Candace Person, his spokeswoman.

This is not the first time the Arizona congressman has been arrested due to his support for immigration reform. In 2013, Grijalva was among the 200 people taken into custody during a demonstration in Washington DC.

“I do not favor punishing children, most of whom are now adults, for the actions of their parents. But we must also recognize that we are nation of opportunity because we are a nation of laws,” said the Pres. in a previous statement.