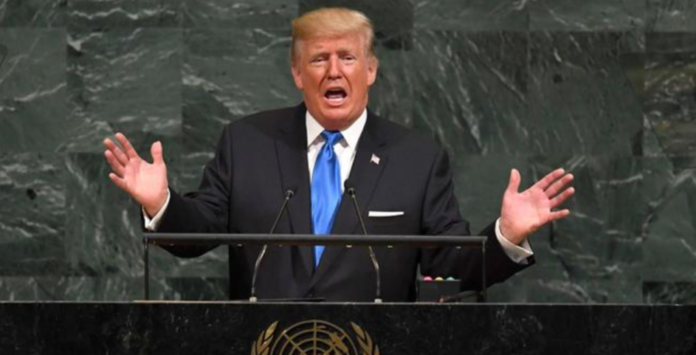 Yesterday, President Trump stood before the United Nations General Assembly and delivered a hearty, patriot, and impactful speech. He did not mince words. The President’s convictions were clear; he made it known that America will always prioritize our interests and the interests of our allies. Naturally, his speech both pleased and irked many people, as noted by USA Today.

“Rocket Man [Kim Jong Un] is on a suicide mission for himself and for his regime. The United States has great strength and patience, but if it is forced to defend itself or its allies, we will have no choice but to totally destroy North Korea.”

The above excerpt was arguably one of the most controversial segments of President Trump’s address. Critics slammed him as an authoritarian dictator with no qualms about ending millions of lives. The President’s critics need to understand a few things. First and foremost, America comes first. Our nation comes first, our interests come first, and our people come first. Also, as the leader of the free world, it is in President Trump’s job description to take actions in the best interest of this nation.

Quite frankly, North Korea has poked the bear for far too long. At some point, consequences will occur. Now so far, they’ve been able to get away with it. Kim Jong Un has no qualms with launching missiles, threatening to end innocent lives, and the like. If America is in danger, if our allies are in danger because of North Korea, President Trump has an ethical obligation to neutralize the threat. If Trump critics don’t like it, that’s too bad. Thankfully, they aren’t running the country.

Another highlight in the President’s address to the United Nations General Assembly was his rightful condemnation of Cuba and Venezuela’s deleterious regimes. He touched on socialism in Venezuela and its devastating impacts. Additionally, the President noted that in order for America to release our trade bans, Cuba will need to engender meaningful reform on their end. Now, neither Venezuela nor Cuba very much cared for being called out on their flaws, but President Trump was correct. Socialism and communism are inherently toxic and in need of ameliorations.

As previously noted, the interests of America will always come first. The people who called President Trump’s address inflammatory or divisive haven’t a clue what they’re talking about. Putting our nation first is not wrong. Refusing to accept threats from North Korea is not intolerant, nor is neutralizing a malevolent and unyielding meance. Finally, calling out failed foreign regimes is the only way for their leaders to perhaps consider a new path.

As the President boldly proclaimed:

“In America, we do not seek to impose our way of life on anyone, but rather, to let it shine as an example for everyone to watch.”