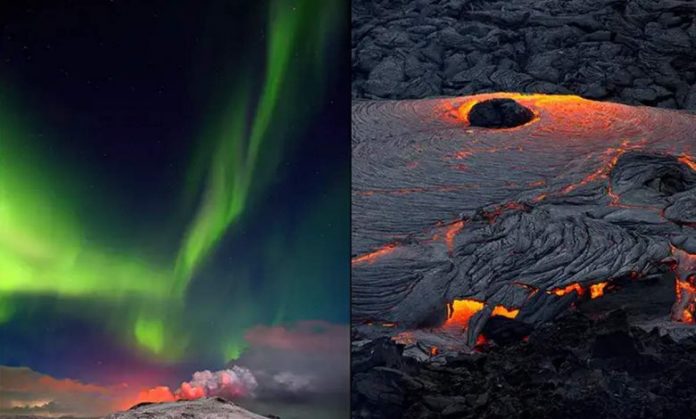 Earlier this year, photographer Chris Mathews captured an unforgettable view of the Aurora Borealis in all its glory directly over an erupting volcano in Iceland. The photo is being honored as a photo of the week by the UN’s World Meteorological Organization.

All Mathews photography can be viewed on his website.

On March 24, 2021, Mathews was in the right place at the right time to get a once-in-a-lifetime photograph. But it didn’t happen by accident.  In an interview with weather.com, the photographer detailed how he captured the viral image.

The colorful dancing lights of the Aurora Borealis are caused when electric-charged particles from the sun crash into the earth’s atmosphere. The lights are seen above the magnetic poles of the northern and southern hemispheres.

This amazing light show appears in many colors. Most common is a pale yellowish-green, produced by oxygen about 60 miles above the earth. When nitrogen is present the lights are blue or purplish-red. All-red auroras are the rarest. They show up at heights of up to 200 miles and are created by high-altitude oxygen.

Shades of blue, red, yellow, green, pink, and violet are not uncommon.

The phenomenon is also known as the Northern Lights. And observers may see scattered clouds with a strange glow, broad streamers, bright arcs, or shooting rays that light up the sky.

In Iceland, the early autumn until spring is the Aurora Borealis season.

How the Northern Lights met a Volcano

Iceland has a lot of earthquake activity. It is located at the intersection of two tectonic plates, which are constantly drifting in opposite directions. And more often than not the earthquakes are centered near a volcano. And heightened activity is often a sign that a volcano is getting ready to erupt.

Every year thousands of quakes are recorded. Iceland recorded over 40,000 earthquakes in the three weeks leading up to the eruption of Geldingadalur on the Reykjanes Peninsula.

According to National Geographic, until 2021, the Geldingadalur volcano had not erupted for 6,000 years. And it’s estimated that there wasn’t an eruption on the entire  Reykjanes Peninsula in over 800 years. The peninsula is a sheltered valley far from any towns or infrastructure.

Mathews had been monitoring the situation since February. And it wasn’t an accident that he was there to capture the perfect image of Aurora Borealis above an erupting volcano.

Setting up the perfect photo

Based on the earthquake activity, Mathews suspected an eruption was on its way. He was scouting out locations that would give him the perfect vantage point. But he was still uncertain if and the volcano would blow.

“The volcano is located on the Reykjanes Peninsula in southwest Iceland, close to the international airport and not far from where I live,” Mathews said. “I’d been waiting a while for an eruption there.”

Then, on March 19, he finally got the call that an eruption was underway.

There was a reddish tint in the sky. That was the glow of flowing lava reflected in the clouds. Mathews headed towards it.

The photographer was hoping for images of the eruption and the Northern Lights together. The first few nights of the eruption were too overcast. He was looking for a place to photograph that offered a good view away from the local city lights.

“I found a good spot at the edge of a farm near Grindavík, and when we had a forecast for clear skies and strong aurora activity…” Mathews explained. “There was another unexpected snowstorm and I almost gave up. But just before midnight the clouds went away, so I set up my gear and waited.”

“It didn’t take long for the aurora to shine over the volcano. By luck, it happened to be on my birthday and I couldn’t imagine a nicer gift!” He added.

“When you watch, the skies light up with rippling colors dancing in total silence overhead. It’s really an incredible experience. I love the summers in Iceland, but I live for the auroras,” Mathews said.

“The hope [is] that people who see my photos will enjoy them and feel some of the sense of wonder that I felt taking them. It’s been my great fortune to witness spectacular beauty – and my privilege to share it.”