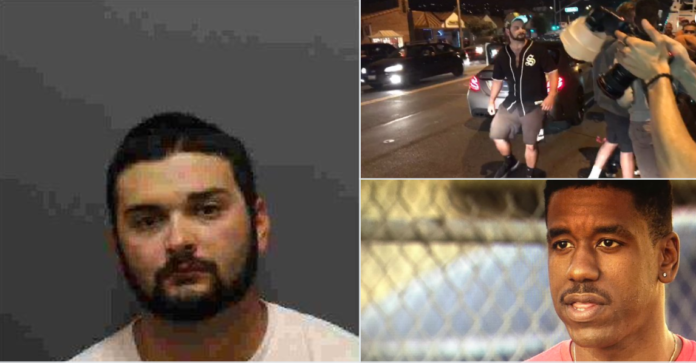 The mainstream media’s flagrant hypocrisy is revealed, yet again!

As reported by the LA Times, 20-year-old Richard Losey found himself in police custody after attacking R.C. Maxwell, a Trump supporter, who just so happened to be black. Furthermore, added on to the misdemeanor battery was a hate crime charge. Maxwell reports being choked, pepper sprayed, and struck multiple times.

In a day and age where everyone has cell phones, onlookers captured the assault on video and posted the footage on YouTube.

Unsurprisingly, Losey identified as a member of AntiFa, which is short for ‘anti fascism.’ How ironic is it for a person who claims to oppose fascism to strike those who share different viewpoints?

Furthermore, Losey’s attack is completely hypocritical to a cause the Left claims to cherish and value. The aforementioned cause goes by the colloquialism of: “Black Lives Matter.”

Left wingers took to the streets countless times to protest so called police brutality, yet they have nothing to say about a liberal white man’s attack on a conservative black man. If the roles were the other way around, the liberal outrage would be endless. If a conservative white man attacked a liberal black man, it would make national news.

Moreover, the Left wonders why conservatives often criticize Black Lives Matter. The exchange between Losey and Maxwell is why. To the radical Alt Left, black lives only matter when taken by a white person. The lives of black conservatives, black police officers, black Trump supporters, and blacks who do not suit the liberal agenda are meaningless to Black Lives Matter. As a result of this cherry picking hypocrisy, they are rightfully not taken seriously.

The mainstream media ought to be ashamed of themselves. Their failure to report on Losey’s unjustified attack on Maxwell simply highlights their agenda and double standards. As previously stated, black Trump supporters directly clash with the duplicitous narrative that President Trump is an evil Nazi who loathes black people.

As everyone knows, when something weakens the media’s agenda, they ignore it and refuse to cover it. Then they wonder why they’re called fake news. Liberal pundits whine on air and complain about the injustices of racism, but it’s all smoke and mirrors.

If liberal reporters truly cared about racism and not oppressing black people, they would be all over this story. CNN, MSNBC, and others would call Losey what he is…a racist. Losey, and other white liberals like him, are the epitome of racists. The belief that one group has to subscribe to a particular ideology is ignorant and condescending beyond belief.

Next time the media decides to talk about Trump and racism, they should cover Richard Losey instead.