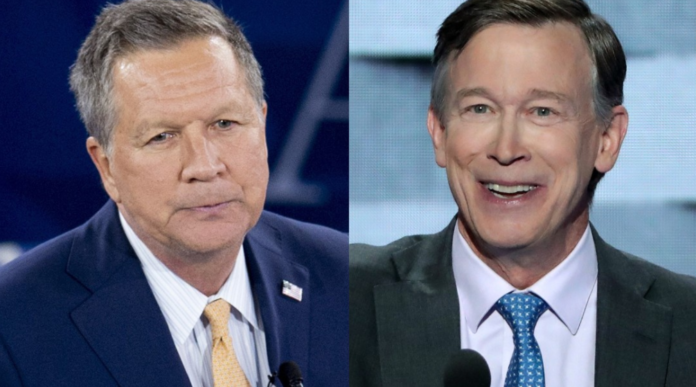 There is never a dull moment in American politics.

Another Run For Office?

Ohio Governor John Kasich is apparently considering another run for the White House…but with a twist. According to CNN, Kasich may team up with Colorado Democrat John Hickenlooper and collaboratively run on an Independent ticket. A anonymous source provided the following statement:

“The idea of a joint ticket has been discussed, but not at an organizational or planning level. What they are trying to show the country is that honorable people can disagree, but you can still problem solve together. It happens in businesses and it happens in families. Why can’t it happen in Washington?”

Why Kasich Will Lose

In theory, the aforementioned statements sound lovely. Working together, running for office on a bipartisan ticket all sounds great in theory, but in reality, it will not work. First of all, running on a third party ticket is essentially setting oneself up for failure. There is not a single third party in America with the funding and backing of Republicans and Democrats. This may not be fair, but this is the reality in modern day politics.

Moreover, President Trump will be running for re-election in 2020 as a Republican. The President will undoubtedly rip Kasich and Hickenlooper to shreds. Kasich will additionally fail to obtain the needed support. Staunch conservatives and even some moderates will frown upon Kasich’s decision to team up with a Democrat. This decision will alienate the few people who may have supported him. Considering the fact that many Americans have questioned whether Kasich is a true Republican or a RINO [Republican In Name Only], collaborating with a left wing liberal won’t help his cause.

Aside from Kasich’s failed run in 2016 and (what many would consider) “RINO” tendencies, he simply is not well liked enough. A certain amount of charisma and energy is required in order to persuade voters to elect you as their leader. Kasich does not have what it takes, by any means. He is the typical, establishment politician. Americans do not want that caliber of leader anymore.

Kasich and Hickenlooper will not win the White House in 2020 even if they are foolish enough to try. The most likely outcome of these two men running as Independents is placing a slight dent in both the Republican Party and the Democrat Party as a result of Kasich/Hickenlooper being a bipartisan ticket. In the end, either a Democrat or a Republican will win the 2020 Presidential election.

Will Kasich truly run for the White House in 2020? Only time will tell.