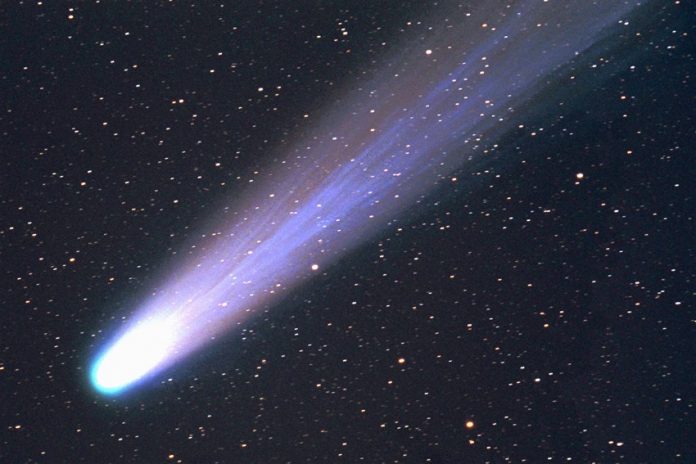 If you are watching the night sky this week you’re in for a rare treat! Expect to see shooting stars streaking from this unique meteor shower that originates from the tail of Halley’s Comet. This phenomenon is known as the Eta Aquarid.

All meteors are space rocks that enter the Earth’s atmosphere. As the space rock plummets towards our planet it begins to burn up. It is the white-hot light that makes a shooting star visible in the sky,  The streak is not actually the meteor, but rather the glowing hot air or train is reacting with the atmosphere.

The meteor shower is comprised of incandescent bits of debris being shed in the wake of Halley’s Comet. The pieces of space debris “light up” in the night sky when they interact with the atmosphere of Earth.

The NASA Jet Propulsion Laboratory claims that each time that the Halley Comet returns to the inner solar system, it sheds a layer of ice, dust, and rock in space. This debris will become the Eta Aquarids in May. And the Orionids in October.

NASA reports that Eta Aquarid meteors are well-known for their brilliant speed. They travel at an estimated 148,000 mph. When they enter the Earth’s atmosphere they leave long glowing trains of light. Up to 30 Eta Aquarid, shooting star streaks can appear every hour. And they are visible for a few seconds, or as long as, several minutes.

Even though debris from the comet’s tail will light up the sky it’s going to be some time before Halley’s Comet is seen. It takes the comet 76 years to orbit around the sun once. The last time the comet completed an orbit was in 1986.

So it will enter our inner solar system again in 2061. Even though it will be 40 years till Halley’s Comet makes its round again, the Eta Aquarids will put on a great light show around the globe.

This is the most brilliant and beautiful skywatcher’s event since the December Geminids!

The light show should start on May 4 and last through  May 6. The Eta Aquarid peaks before dawn on Wednesday, May 5. This is when the most and brightest shooting stars are visible.

It’s best to see the streaking lights watching from a rural or darker area away from city lights. Check your local weather conditions. Too many clouds can hide the phenomenon.