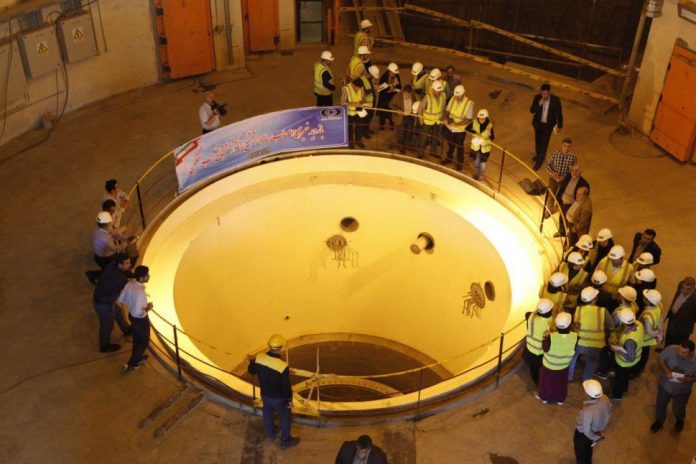 An explosion that struck Iran’s Natanz uranium enrichment site caused a power failure on Sunday. Iranian officials insist that it was a deliberate act of sabotage. And they are suggesting that Israel is responsible.

The Natanz complex has an independent power grid, several backup systems, and many layers of security protection. The facility was supposed to be “attack-proof.”

The heavily fortified site appears to be totally blacked-out. According to the New York Times, a large explosion completely destroyed the internal power system that feeds the underground centrifuges at the Natanz uranium enrichment site.

The explosion is said to be a severe blow to Iran’s ability to enrich uranium. Intelligence sources claim that it could take at least nine months to restore production to Natanz.

The blackout of the Natanz power plant comes less than a year after a fire of unknown origin destroyed an above-ground facility for the assembly of centrifuges.

On Saturday hours before the explosion at Natanz,  Iran celebrated its National Nuclear Day. This is an annual event that showcases the progress in nuclear technology. A music video featured singing nuclear scientists with Iranian flags waving.  The scientists were standing beside the new centrifuges and holding photos of assassinated colleagues.

Iran’s president, Hassan Rouhani, issued a statement on “National Nuclear Day” celebrating the new centrifuges, which speed up the time needed to enrich uranium. Uranium is the fuel for a nuclear bomb. And the Natanz uranium enrichment site is thought to be Iran’s largest location.

Rouhani insisted that Iran’s efforts were not intended to produce weapons. And claimed that “If the West looks at the morals and beliefs that exist in our country, they will find that they should not be worried and sensitive about our nuclear technology.”

The US tries to reinstate the nuclear agreement

The Biden administration has been trying to negotiate with Iran. It is uncertain what impact, if any, the Natanz explosion will have.

Iran and the United States are not having direct relations in Vienna.  The UK, China, France, Germany, and Russia, through the European Union, are engaging in shuttle diplomacy.

The EU is said to be focusing on how to lift Trump’s economic sanctions. They are also trying to get Iran to set limits on enriched uranium and get rid of the centrifuges needed to produce it.

The resulting blackout brings uncertainty into the Biden administration’s efforts to reinstate the 2015 Joint Comprehensive Plan of Action (JCPOA) nuclear deal. The original deal was denounced by the Trump administration. Then-President  Trump described the JCPOA  as “the worst deal ever” and complained about the millions given to Iran. But no one denied that much of the money went to fund terrorist operations.

The Trump administration has imposed heavy economic sanctions on Iran for violations of the JCPOA, and other international breaches.

The Wall Street Journal reported that in 2019, Iran had exceeded the limits set by the nuclear deal, and by January 2021 Iran was already producing 20% enriched uranium. And satellite photographs show that centrifuges for enriching uranium have been present at the Natanz complex since at least 2019.

Even before the Trump administration made it public, it is doubtful that Iran ever lived up to the terms of the 2015 JCPOA.

Israeli officials have never hidden their dislike of the 2015 JCPOA. They have also expressed the belief that Iran intends to use its nukes as weapons.

Israel considers Iran its biggest threat. They have sabotaged Iran’s nuclear work in the past. Sometimes the sabotage has been in collaboration with the U.S.

Israel has also been accused of orchestrating the assassinations of several Iranian nuclear scientists. The latest killing took place last November with an ambush Mohsen Fakhrizadeh, the primary developer of its nuclear program.

Israel, as a matter of policy, will not confirm or deny its involvement.

American defense secretary, Lloyd J. Austin III, was visiting Israel on the day that Natanz was attacked. And he was meeting with Prime Minister Benjamin Netanyahu and the country’s defense minister, Benny Gantz.

It is not known if the Natanz attack was discussed.