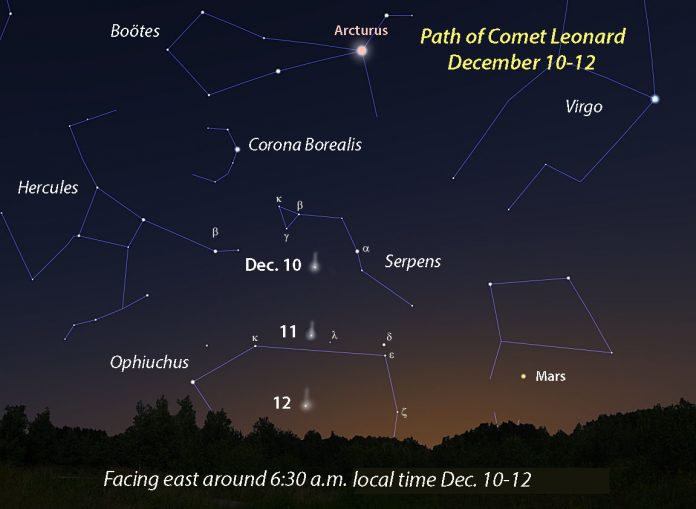 Earlier this year astronomer, Gregory Leonard, discovered a new comet. The Comet Leonard, also known as C/2021 is already visible in the December sky. And will be at its closest point to Earth on December 12th.

The online publication EarthSky describes the Comet Leonard  as “likely to be 2021’s best comet and its brightest comet by year’s end.”

Stargazers in the US were disappointed by the December 4th total solar eclipse. It was only fully visible in Antarctica. And people in the southern tip of South America, Africa, Australia, and New Zealand were able to see partial phases of the event.

To view C/2021 you will probably need a telescope. At its nearest point to the Earth, it is still 21 million miles away.

“Comets are notoriously difficult to predict in terms of brightness and visibility,” NASA reports.

“Comet Leonard is predicted to peak at a brightness that will probably require binoculars to spot it. There’s a chance it could be bright enough to see with the unaided eye, but again, with comets, you really never know.”

Comet Leonard is now visible before sunrise. NASA recommends you point your telescope between the Big Dipper’s handle and the star Arcturus. Arcturus is one of the brightest stars in the night sky.

As C/2021 gets closer it will approach Earth’s horizon. This will increase it’s brightness. But while it rides the horizon, it becomes more challenging to locate and view, according to NASA.

NASA suggests that after the comet reaches its closest point to Earth on December 12th, it becomes easier to see in the evening sky.

Grab your telescope or binoculars right after the sun sets starting on December 14th. As Leonard continues its orbit it will move away from the Earth towards the sun.

It’s worth getting a look at the new comet. Because this is the only chance that the current inhabitants of Earth will be able to see Comet Leonard.  Its discoverer Gregory Leonard told Inverse that the comet only visited this Solar System 75,000 to 80,000 years ago.

“So it’s already had one passage, but of course nobody was really around to record that event,” Leonard said in an interview. “And now it appears this comet is on what we call hyperbolic orbit so once it passes the Sun, it will be ejected from the Solar System and is going to be flown out for millions of years until likely stumbling into another star system.”