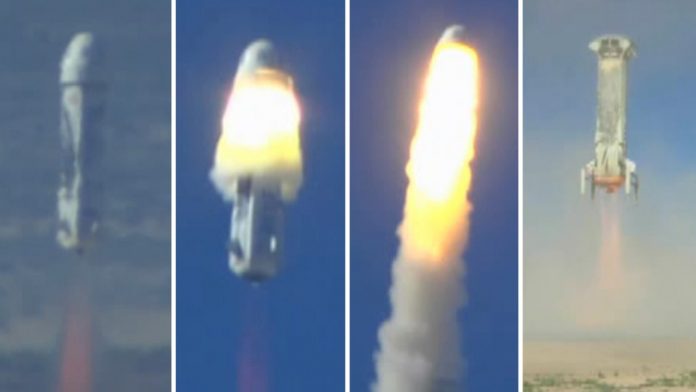 On Monday a Blue Origin launch failure took place in West Texas. The New Shepard rocket was launched from Launch Site One 25 miles North of Van Horn, Texas. It experienced an immediate failure of its booster rocket. And its abort system was triggered which released the capsule to parachute to Earth.

Jeff Bezo’s Blue Origin tweeted out that “This was a payload mission with no astronauts on board. The capsule escape system functioned as designed.”

We’re responding to an issue this morning at our Launch Site One location in West Texas. This was a payload mission with no astronauts on board. The capsule escape system functioned as designed. More information to come as it is available.

The space agency also confirmed the crash of the rocket booster that first caught fire at 27,000 feet.

“During today’s flight, the capsule escape system successfully separated the capsule from the booster. The booster impacted the ground. There are no reported injuries; all personnel have been accounted for.”

Yesterday’s mishap was launched with a different booster and capsule based on the same design.

Yesterday marked the first failed Blue Origin mission to fall since the company’s first flight in 2015.

Since August 2021, Blue Origin has launched six crewed suborbital flights. And 31 customers and special guests (including Bezos himself) made it to low orbit space and back.

This latest launch had no passengers, or crew on board. This failed flight was a mission filled with experiments from K-12 schools, universities and other organizations focused on science, technology, engineering, and math education. And featured the Blue Origin STEM research program.

The FAA issued a statement about the launch failure which Blue Origin is calling an “anomaly.”

“The FAA will oversee the investigation of Blue Origin’s NS-23 mishap that occurred at its Launch Site One location in West Texas.”

“The anomaly that occurred triggered the capsule escape system. The capsule landed safely, and the booster was impacted within the designated hazard area. No injuries or public property damage have been reported.”

“This was a payload-only mission; there were no humans aboard.”

“Before the New Shepard vehicle can return to flight, the FAA will determine whether any system, process, or procedure related to the mishap affected public safety. This is standard practice for all mishap investigations.”

“The FAA is responsible for protecting the public during commercial space transportation launch and re-entry operations.”