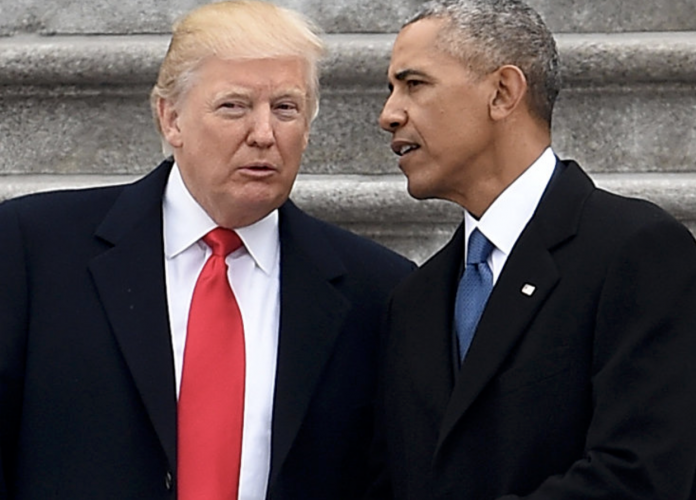 During a speech at the University of Illinois at Urbana-Champaign on Friday, former President Barack Obama slammed President Donald Trump for “capitalizing” on social unrest and discontentment, reports The Hill.

Friday’s speech is one of the first times in over a year in which Obama has referred to Trump by name. The former commander in chief’s statements centered around social and political unrest. However, Obama declared that Trump is not the root cause of this discontentment.

“It did not start with Donald Trump,” Obama said. “He is a symptom, not the cause.”

The former president then proceeded to explain how he believes Trump has contributed to “the cause.”

“He’s just capitalizing on resentments politicians have been fanning for years,” Obama said. “A fear, an anger that’s rooted in our past. It’s also born of the upheavals that have taken place in your brief lifetimes.”

Obama also called upon the country to determine its principles and ethics.

“I’m here today because this is one of those pivotal moments when every one of us as citizens of the United States [needs] to determine just who it is that we are, just what it is that we stand for,” he said.

The former president’s midterm address did not end with criticisms of Trump and social discontentment. Obama stated that the Department of Justice should not be a “partisan” entity; he also indirectly referenced the president’s condemnation of Attorney General Jeff Sessions, who recused himself from the ongoing Russia investigation.

“[We do not] explicitly call on the attorney general to protect members of our own party from prosecution because an election happens to be coming up,” Obama said.

Veering away from Trump, Obama noted the importance of elections. He warned against “indifference” and young Americans who stay home instead of going to the polls.

“If you thought elections don’t matter, I hope these last two years have corrected that impression,” Obama said. “So if you don’t like what’s going on right now — and you shouldn’t — do not complain. [Vote.]”

Obama and Trump have been adversaries for quite some time. Trump frequently criticized the 44th president throughout his White House tenure. Obama, too, campaigned against Trump during the 2016 election.