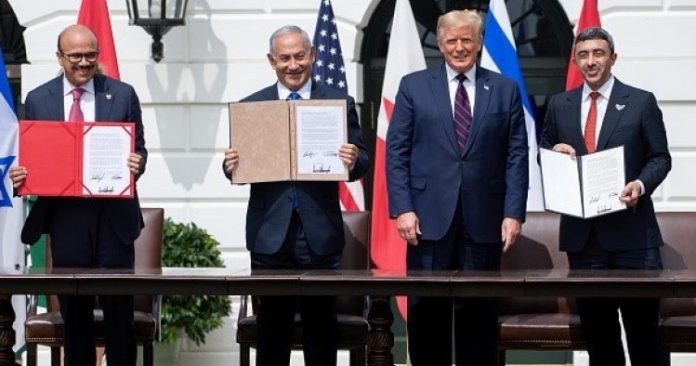 For some reason, the media hasn’t paid much attention to Abraham Accords and the few articles that appeared were critical.

Every American president in the last 30 years has tried to broker some sort of peace-in-the-Middle-East. Each of them has also promised to move the US embassy to Jerusalem. None of them were successful.

President Donald Trump moved the embassy within two years of taking office and then he began to piece together the Abraham Accords, a history-making peace deal for the Middle-East.

The strategy seems almost brilliant and it is the exact opposite of what has become a totally ineffective UN policy executed for the last 30 years. But this is just my opinion.

“The United Arab Emirates, Bahrain, and Sudan are the first Arab nations to normalize relations with Israel in over 25 years.”

“The expansion of the Abraham Accords to include Sudan is a significant step that will further enhance Israel’s security and create opportunities for Sudan and Israel to deepen their economic ties and improve the lives of their people.”

The idea is that “As more countries normalize relations with Israel, the region will become more stable, secure, and prosperous.”

The UAE agrees to decriminalize some Islamic laws

The United Arab Emirates (UAE) made some major announcements, in the state-owned newspaper the National, on November 7. The country’s Islamic morality laws are getting much less restrictive. Now unmarried couples can cohabitate, alcohol restrictions are being loosened and so-called “honor killings” are no longer tolerated.

The sweeping legal changes follow a historic U.S.-brokered deal. The UAE and Israel are now in the midst of normalizing relations including travel and trade. This move is expected to bring an influx of investment and mutual tourism investment in every country that joins in the Abraham Accords.

Attempting suicide, sex before marriage, and a variety of “honor” crimes are being decriminalized. Any person who commits an “honor crime” assaulting or killing a woman for perceived promiscuity will now be prosecuted.

There is a long way to go in this process. But the first step has been a big one. Hopefully, the Abraham Accords could lead to peace in the Middle-East.

Regardless of politics, I’m guessing that the new administration won’t return to the failed policies of the past. Because in this case, that would require a u-turn on the promising road to peace.