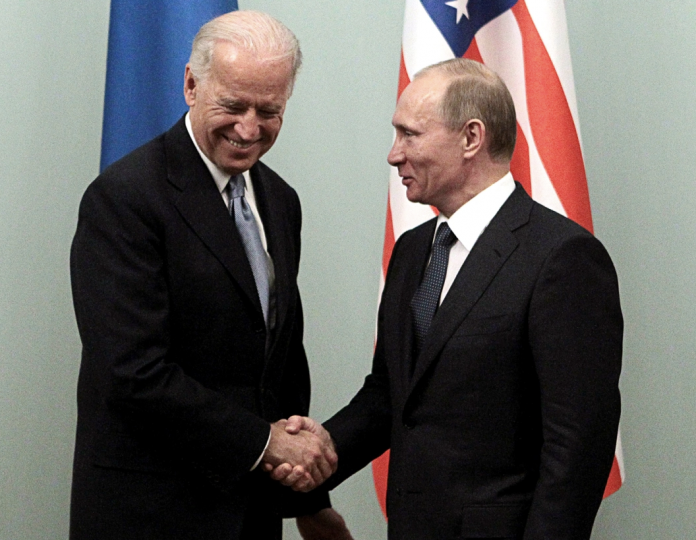 Towards the end of last week, Russian President Vladimir Putin swiftly moved in against Ukraine with strikes, soldiers, and various other forays. The autocrat’s onslaught is very much designed to take control of Ukraine and expand his own personal power.

For what it’s worth, Ukrainians are fighting back. There have been viral incidents of Ukrainian soldiers standing up to threats from Russia and otherwise refusing to surrender as they’ve been called to do.

In light of recent developments, there is a possibility that Ukraine could withstand this storm and actually win against Russia. During this weekend alone, word of Putin’s reported frustration with the lack of progress on the end of his soldiers has already made headlines.

However, what everyone needs to understand is this: Putin’s war crimes are directly tethered to US President Joe Biden’s weakness on foreign policy. This weakness is not without serious consequences and a potential domino effect of disasters.

The Russian president, along with other world leaders, observed Biden’s terrible management of Afghanistan in 2021. Putin watched Biden take out American troops before first ensuring the safety of US citizens, along with Afghan allies of the US.

Putin also observed Biden show more consideration towards keeping a handshake deal made with the Taliban than towards looking out for US citizens and US allies in Afghanistan. By contrast, when Trump served as president, Putin didn’t dare move against Ukraine.

Biden strengthened Putin's energy sector while dismantling ours–and no amount of spin will change it.

However, Biden’s lack of prowess on foreign policy sent a clear message to the Russian president. It let Putin know Biden’s tenure served as the ideal time for him to move on Ukraine.

Likewise, as Putin’s onslaught against Ukraine is happening, the world is monitoring Biden.

If Ukraine is not successful in shutting down this attack on their homeland, China and other US enemies will likely wage similar attacks. China, for starters, may very well go after Taiwan, opening an entirely new can of worms.

When Trump held the White House, US enemies remained at bay. Yet, with Biden in the Oval Office, our nation’s enemies are growing stronger and more unified.

Amid Russia’s onslaught against Ukraine, North Korea is coming out of the woodwork. North Korea is publicly aligning itself with Putin and claiming the United States is to blame.

Finally, Ukraine is just a starting point for Putin. If the Russian president successfully takes Ukraine, Finland and Sweden may soon find themselves under attack.

At the end of the day, there’s no telling where this ends if Ukraine falls. However, it certainly and tragically began with the weakness and cowardice of Joe Biden.