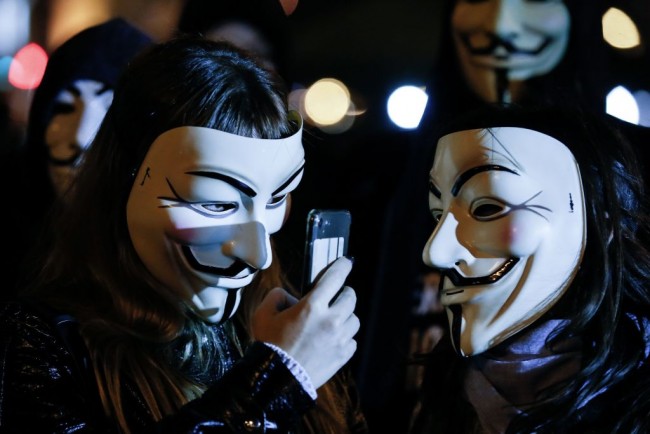 Anonymous, the hacktivist collective, has declared a cyberwar on Russia. The group claims Vladimir Putin’s government has committed a crime against humanity with the ‘Kremlin’s brutal invasion’ of Ukraine.

In the meantime, Ukraine continues to fight off ongoing cyber-attacks from Russia and Belarus. And they welcome the help of hackers.

The international cyberpunk hackers are known for high-profile cyberattacks against several governments, including the US, Israel, and Uganda. They have also hacked corporations like PayPal, Sony, and Mastercard. And they hit the Church of Scientology, as well as Westboro Baptist Church.

The decentralized hacker group identifies with Guy Fawkes masks as portrayed in the film V for Vendetta. But the cyberpunk techies are more likely to hide their IP addresses and use devices like voice changers or text-to-speech programs to mask their identities.

As reported by Infosecurity, Anonymous made the announcement on its Twitter account on Thursday as the invasion began.  The message read: “The Anonymous collective is officially in cyberwar against the Russian government. #Anonymous #Ukraine.”

RT has been criticized for putting out “propaganda” against Ukraine. Recently the UK government requested the media regulator to review its output.

“After the statement by Anonymous, RT’s websites became the subject of a massive DDoS attack from an estimated 100 million devices, mostly based in the US”, RT told The Independent in a statement.

“Due to the hack, there were temporary website access limitations for some users, yet RT promptly resolved these issues.”

The strategy of Distributed Denial of Service (DDoS) attack is to overwhelm websites with junk traffic from a large number of devices.

DDoS attacks hit websites of Ukraine’s defense, foreign, and interior ministries ahead of Russia’s invasion. And Russia is suspected of the hack attacks.

Anonymous also signaled that it intends to ramp up cyber-attacks on the Russian state, tweeting out that: “We are convinced that sanctions against Putin’s criminal regime will have no effect. We call on countries that support #Ukraine to sever ties with #Russia and expel Russian ambassadors. #Anonymous will intensify cyber-attacks on the Kremlin this afternoon. (Moscow Time) #OpRussia.”

Before the full-scale invasion, the Russian military was massing troops at the Ukrainian borders. Another hacktivist group known as Cyber Partisans hacked a Belarusian railway system to disrupt troop and weapon buildup.

The railway was allegedly being used by the Russian military to move the weapons into a region of Belarus, a key strategic area for Moscow’s planned invasion.

“The government continues to suppress the free will of Belarusians, imprison innocent people, they continue to unlawfully keep… thousands of political prisoners,” a spokesperson for the hacktivists told Ars. They added that they want to overthrow “Lukashenko’s regime.”

Cyber Partisans allegedly used ransomware to shut down the railway. The Belarusian government did not acknowledge the attack. The railway released a Statement to travelers announcing “technical reasons” for delayed travel.