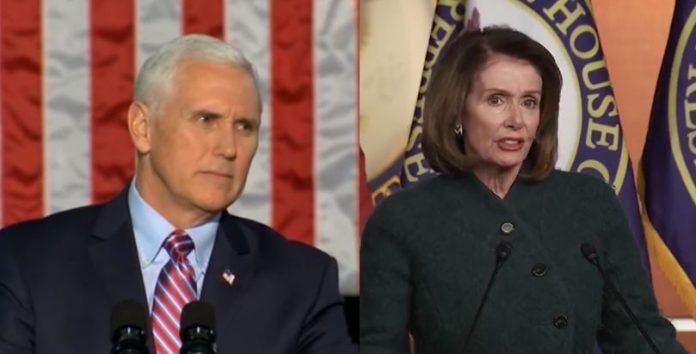 Pence said, “I heard Nancy Pelosi, before the tax cut was voted on, predicted economic Armageddon. It’s just amazing to me that after this tax cut passes, three million Americans get another $1,000 in their pockets… She actually described that as crumbs.”

He added, “If you’re going to say that $1,000 is crumbs, you live in a different world than I’m living in.” He went on to say that having another $1,000 in his pocket at the end of the year means Christmas. It also means “a little something extra for Mrs. Pence.”

The Vice President made the statement during the first day of the GOP policy retreat at The Greenbrier resort.

On January 11, Pelosi said the bonuses American workers are receiving are insignificant compared with the billions corporations are getting.

“In terms of the bonus that corporate America received, versus the crumbs that they are giving to workers to kind-of put the schmooze on, [it] is so pathetic,” according to Pelosi.

On January 26, the House Minority Leader doubled down her criticism on the GOP tax cut. She described the employee bonuses as merely “pennies.”

Pretty obnoxious the GOP thinks workers should be weak-kneed with gratitude for corporations giving them pennies while pocketing a multi-billion dollar tax break stolen from the future of the middle class. #GOPTaxScam pic.twitter.com/ulLIexUf4q

On Wednesday night, Drew Hammill, the spokesman for Pelosi, countered Pence. According to him, the Vice President misquoted the House Minority Leader. He said the primary beneficiaries of the GOP tax cut are big corporations and the wealthy.

Hammill said, Quoting Leader Pelosi out of context doesn’t change the fact that 83 percent of the benefit under the GOP Tax Scam goes to the wealthiest and massive corporations.”

“While hundreds of billions flow to corporate America on the backs of the hard-working families, the vice president is proudly touting a tax hike on 86 million middle class families,” added Hammill.