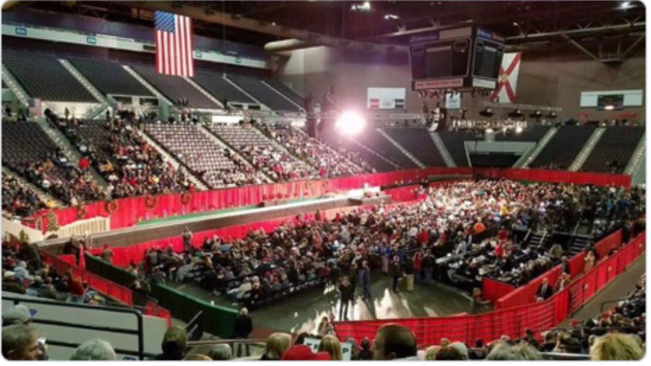 On Friday night, Dave Weigel, a political reporter for the newspaper tweeted a photo showing a mostly-empty venue. He took the photo hours before the event.

In a tweet on Saturday, Trump called Weigel’s photo a “phony.” He also demanded an apology and removal of the photo from the social network

.@DaveWeigel @WashingtonPost put out a phony photo of an empty arena hours before I arrived @ the venue, w/ thousands of people outside, on their way in. Real photos now shown as I spoke. Packed house, many people unable to get in. Demand apology & retraction from FAKE NEWS WaPo! pic.twitter.com/XAblFGh1ob 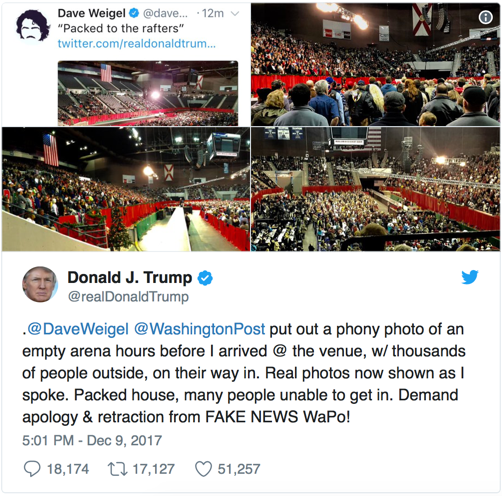 Weigel immediately tweeted an apology to the President. He also explained that he deleted his initial tweet after a fellow media man told him that he had “gotten it wrong.”

Sure thing: I apologize. I deleted the photo after @dmartosko told me I’d gotten it wrong. Was confused by the image of you walking in the bottom right corner. https://t.co/fQY7GMNSaD

Everything I say on Twitter is a joke, except what I say about @swin24. https://t.co/tI7SQnpoN9

In response to Weigel’s apology, Trump said the reported should be fired for his “fake picture.”

.@daveweigel of the Washington Post just admitted that his picture was a FAKE (fraud?) showing an almost empty arena last night for my speech in Pensacola when, in fact, he knew the arena was packed (as shown also on T.V.). FAKE NEWS, he should be fired.

Earlier on Saturday, the President blasted CNN and stated it should change its slogan as the least trusted name in news.

During the ABC World News Tonight that same day, Ross read a clarification stating that Trump asked Flynn to communicate with Russia after the elections. Flynn served as Trump’s national security adviser for a brief period. He resigned amid reports about his possible illegal contacts with Russian ambassador Sergey Kislyak.

In response, Trump tweeted that stock market went down because of Ross’ “fake and dishonest” reporting. He encouraged people to sue ABC for damages due to its bad reporting.

People who lost money when the Stock Market went down 350 points based on the False and Dishonest reporting of Brian Ross of @ABC News (he has been suspended), should consider hiring a lawyer and suing ABC for the damages this bad reporting has caused – many millions of dollars! 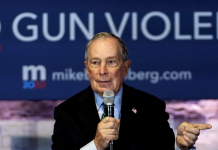