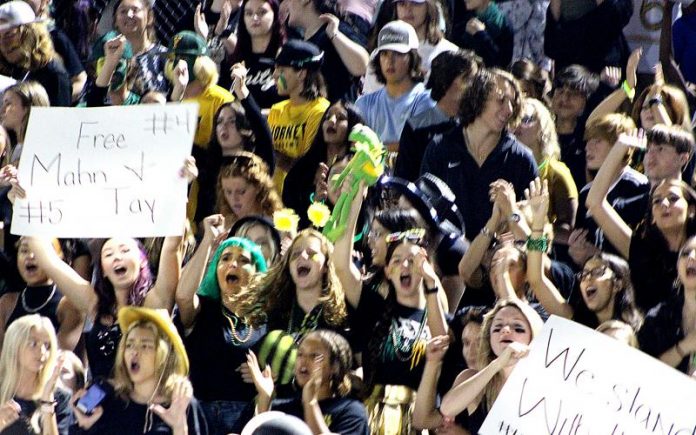 At Yulee Highschool things are very tense. And parents are angry. Everyone is upset since a student-made racist video went viral on social media. And when Black students confronted the White video-makers they were punished.  And the White kids had no consequences.

Parents are angry about the response of school administrators. And they have issues about the district’s handling of the situation, calling it “unfair and inconsistent.”

Many of them attended Thursday night’s school board meeting to demand more answers and explanations of the principal’s response to the controversy.

The video was filmed over the summer. And it was made before either of the boys were students at Yulee. The video-makers claim they had no intention of anyone seeing the video.

In October, another student shared the video on Snapchat.

According to the school district’s assistant superintendent, the video was sent to a group of Black students, some of them were football players. When the Black students confronted the kids in the video there was a “physical altercation.”

Both Black and White Parents are concerned

Parents of the students who confronted the filmmakers said they were suspended for five days. The student who shared the video was also disciplined. But the two students featured in the viral video were not punished.

Melissa Rick’s son, also a football player, shared the video to call attention to the situation. And he was also suspended.

“All we need is an administration that cares about the issues and is willing to publicly bring awareness to our students and our community, that they are actively looking for ways and resolutions to bring in the parents, bring in the students, and figure out a way to bring these kids together and stop allowing the separation,” parent Melissa Ricks said in a Facebook post.

Another parent said it was unbelievable that the kids who made the “vile, nasty, distasteful video” are still able to attend school. And the students who spoke up about it “to defend themselves are sitting at home.”

Parents and students are all voicing support for the suspended players and asking that the video makers be held responsible, or at least to the same standards.

Nassau County’s Assistant Superintendent Mark Durham gave a statement to explain how the district decided which students to punish.

“The video was not meant to be shared outside of a small group of friends and it was not targeted at any particular student,” Durham said. “The two students in the video say they meant it as a joke amongst friends and did not intend for anyone outside of their small group to view it.”

Durham said that the district had no authority to punish students for behavior outside of school.

“While schools do have jurisdiction to discipline students for their online, off-campus behavior under certain circumstances, this case did not meet the criteria,” he said.

“While the school and district find this type of joke cruel and abhorrent and would discipline the students if legally permissible, the circumstances of this case just don’t allow it. However, the student who sent the video to several, specific students does meet the criteria necessary to punish a student for their online behavior. The student was assigned discipline consistent with the district’s code of conduct.”

In an update on Oct. 22,  Durham said the district and high school “want to make it clear that acts of discrimination based on race will not be tolerated on our campuses or toward our students. Individuals committing such acts will be subject to disciplinary consequences. We recognize that many students were negatively affected by the content of this video and the school is prepared to support their needs.”

On Friday, players on the football team were planning to sit out during the homecoming game. They wanted to show support for their suspended teammates. But parents reported the school’s principal said the players would have to forfeit the rest of the season if they didn’t play.

During the game, the players held up their teammates’ jerseys in a gesture of solidarity.

Thursday night’s school board meeting had a record number of attendees. Parents were demanding answers and explanations of the principal and school district’s response to the controversy.

A large number of students were on-hand holding posters supporting #4 and #5 the suspended Black players.