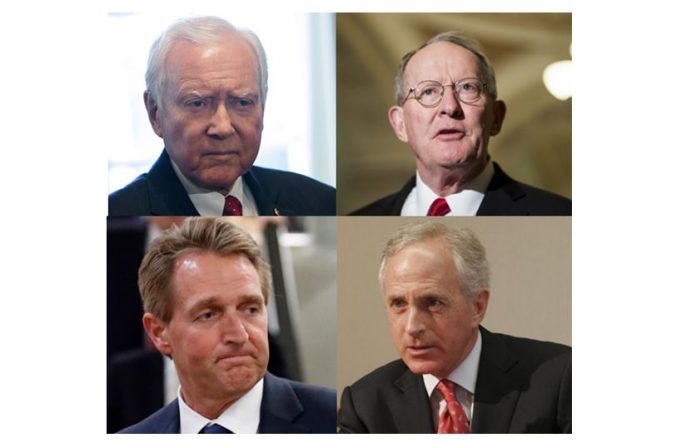 President Donald Trump suggested to Senate Republicans to use the “nuclear option” to prevent Democrats from opposing the House-passed short-term spending bill that includes $5 billion in border wall funding.

Mitch, use the Nuclear Option and get it done! Our Country is counting on you!

The nuclear option Trump was referring to as a nuclear option is parliamentary procedure that allows the Senate to end the right to filibuster legislation. Democrats can use this powerful legislative device to debate and object the House-passed short-term bill for as long as they want. It requires three-fifths or 60 votes to end the filibuster.

In a series of tweets, Hatch said, it is a mistake to eliminate the legislative filibuster. He also stressed that “requiring compromise is the interest of both parties in the long term.”

“I’ve long said that eliminating the legislative filibuster would be a mistake. It’s what’s prevented our country for decades from sliding toward liberalism. It’s inconvenient sometimes, but requiring compromise is in the interest of both parties in the long term.”

Hatch in 2017: “without the filibuster this country would’ve been gone a long time ago.”https://t.co/Akpu1NA2Ex

On the other hand, Sen. Lamar Alexander of Tennessee released a statement rejecting Trump’s proposal to nix the legislative filibuster. According to him, The legislative filibuster—the requirement that it takes 60 votes to pass major legislation—protects the minority, and for most of the last 70 years, conservatives and Republicans have been in the minority. Since World War II, Democrats have controlled the Presidency and both houses of Congress for 22 years; Republicans have had such complete control for only 8 years.”

He added, “We are a nation that prizes the rule of law…‘A senate majority that can change the rules anytime it wishes, is a Senate without any rules…We have rules to follow.  I want to put a stop to this practice of the Senate breaking its rules to change its rules. I will not vote to turn the Senate into a rule-breaking institution and I hope that my colleagues will not.”

Retiring Senators Jeff Flake of Arizona and Bob Corker of Tennessee tweeted that they will not support ending the right filibuster legislation.

The Senate filibuster is about the only mechanism left in Washington that brings the parties together. Deploying the nuclear option would blow that up. I will not vote to do it. https://t.co/XDL19fuSMP

While rules changes may be in order at some point, I will continue to follow rules relative to legislation as they exist today as I finish my term.

Schumer says Trump temper tantrum will not get him a wall

Earlier on Friday, the president warned of government “shutdown” if Democrats vote against the $5 billion funding for the border wall.

On Thursday, Senate Minority Leader Chuck Schumer emphasized that the House resolution will not pass the Senate. He added, “The Trump temper tantrum may produce a government shutdown; it will not get him the wall.”

In his remarks on the Senate Floor on Friday, Schumer said Trump must take the blame for the shutdown.