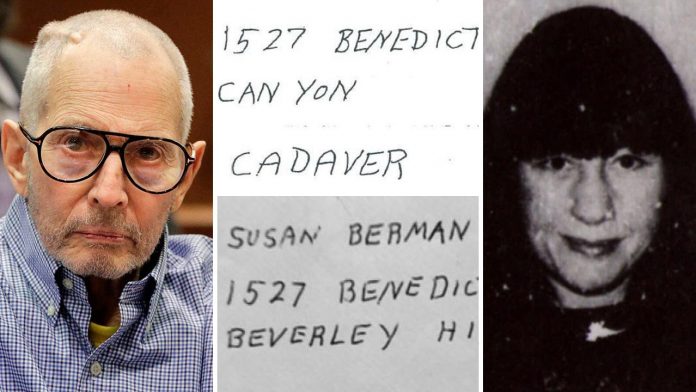 Robert Durst was sentenced in a Los Angeles courtroom on Thursday. Durst found guilty of first-degree murder will spend the rest of his life behind bars.

The 78-year-old New York real estate heir was sentenced for the execution-style murder of his long-time friend Susan Berman in 2000.

Susan Berman had her own dark history. She was the daughter of an infamous Las Vegas gangster with family ties to Bugsy Siegel and Meyer Lansky.

Durst was first arrested for killing Berman in 2015, in New Orleans.

His arrest came shortly before the final episode of HBO’s series “The Jinx: The Life and Deaths of Robert Durst.”

The show explored three different cases to which Durst was linked. And his own words in the final episode were “What the hell did I do? Killed them all, of course.”

The prosecution’s case claimed that Berman was ready to go to the police about the 1982 disappearance of Durst’s wife. She was threatening to reveal she’d lied to provide him with an alibi for the time frame when Kathie disappeared. And that he was paying her to keep quiet. Prosecutors offered proof Durst had been sending Berman large sums of money just prior to her death.

The prosecution set out to prove Durst was complicit in the disappearance of his wife Kathleen “Kathie” McCormack Durst. Although the case still remains unsolved. Durst denies any involvement in his wife’s disappearance. But he has always been a suspect in her mysterious disappearance.

After decades of denial, Durst admitted in court to writing the famous “cadaver note” from 2000. And sending it to the police. The note directing authorities where to find Susan Berman’s body was important evidence.

The prosecution also had hundreds of recorded jail calls that were later used against Durst in court. And developed evidence from the documentary.

Robert Durst’s brother, Douglas, is now the president of the company. The real estate company controls millions of square feet of office space in New York. And Forbes values the family fortune at $8.1 billion.

Robert Durst was the troubled son in the real estate empire.

In 2003, Durst stood trial in Texas for killing his neighbor Morris Black. Durst says he did kill Black, but pleaded self-defense. He even claims to have dismembered the body with saws and an ax. Despite his admissions, the jury found it was self-defense.

It has taken decades to convict Durst. So far, Susan Berman’s murder is his only conviction.

After the sentencing, Deputy District Attorney John Lewin called Durst a “narcissistic psychopath” who “killed his wife and … had to keep killing to cover it up.”