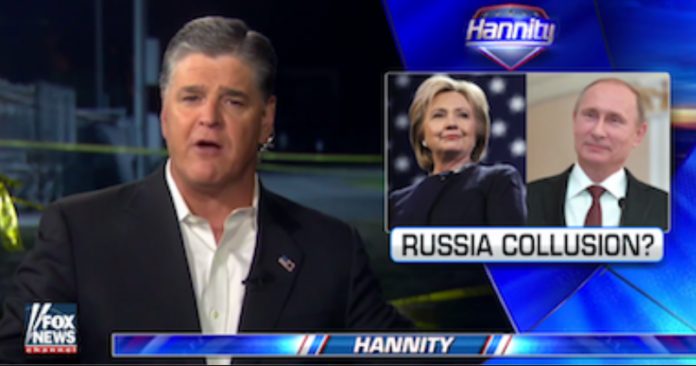 Last night, Fox News anchor Sean Hannity dropped a major bombshell about the Clintons, as reported by The Gateway Pundit.

Excerpts from Hannity’s remarks are as follows:

“After President Trump won in November, President Obama and his administration — they were telling anyone who would listen, ‘Russia! Russia interfered with our election. Russia was creating a direct threat to American democracy.’ Well if that’s the case, why when they have mountains of evidence that we will reveal tonight of Russian bribery going back to 2009, why then would the Obama administration and Hillary [Clinton] in particular sign off on the sale of 20% of America’s uranium to Vladimir Putin and the Russians?”

Hannity then disclosed information about the Clintons’ involvement in the Uranium deal and their acceptance of Russia funds towards their foundation:

“Tonight, with this new evidence, what we have discovered is that the evidence against the Clintons is overwhelming, it is incontrovertible. Hillary Clinton and her husband sold out America to the Russians while millions of dollars flowed to their family foundation. And in the process, Clinton created a massive national security risk for every man, woman, and child — giving Vladimir Putin control over American uranium.”

Russia and the 2016 Election

Firstly, Russia and their alleged involvement with America is a very touchy subject. This is especially true since the 2016 elections and allegations of Russia collusion. Of course, thoughts on Russian interference is greatly divided by partisanship.

The vast majority of conservatives view the aforementioned theories surrounding Russia as Democratic sour grapes prompted by Clinton’s loss. Conversely, the majority of liberals are convinced that Russia influenced the election in the President’s favor.

The Promotion of the Russian Collusion Theory

The media has come under fire for adamantly promoting the Russian collusion theory. Many conservatives expressed displeasure, especially in light of the Clintons’ involvement with Russia. Sources note the FBI’s 2009 discovery of the Clintons’ accepting bribes from Russia. However, the FBI, along with the Department of Justice, took zero action.

Right-leaning Americans questioned the media’s reluctance to cover the Clintons’ involvement with Russia while continuously promoting the unproven theory that President Trump colluded with the Russian government to win last year’s election.

You can view the entirety of Hannity’s statements here.