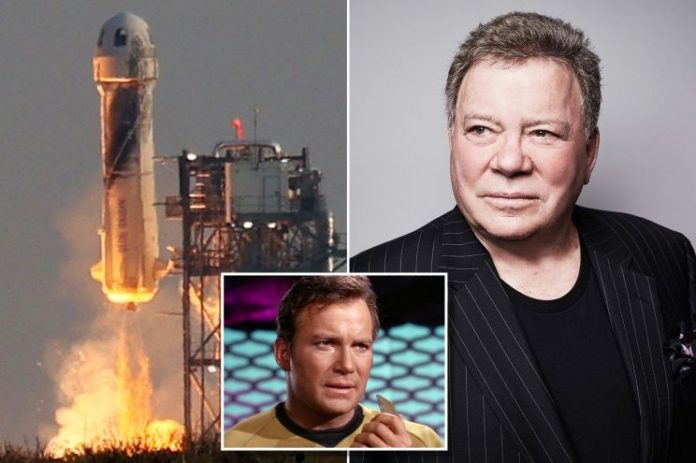 Fifty years ago, William Shatner, 90 was portraying the first Star Trek captain on the iconic TV series.  And this week the Star Trek actor officially became the oldest person flying in space, ever.

On returning to Earth from the 11-minute spaceflight, Shatner was visibly moved.

Both Boshuizen and de Vries  paid for tickets. But Blue Origin has kept their ticket prices under wraps. In the past, Bezos has previously said the total of tickets sold was nearing $100 million.

This was the second time Blue Origin has hosted short flights into space. Bezos was onboard the first.

Bezos met Shatner and the other passengers on New Shepard’s NS-18 launch with their Blue Origin astronaut wings. After they exited the capsule he greeted the crew in the West Texas desert.

“Okay guys, we have four astronauts here before you,” Bezos said as he presented commemorative astronaut wings.

Bezos met Shatner and the other passengers on New Shepard’s NS-18 launch with their Blue Origin astronaut wings. After they exited the capsule in the West Texas desert he greeted the crew.

Star Trek: The Original Series had its debut in the US on September 8, 1966. And ran for 3 seasons.

The famous opening line, “To boldly go where no man has gone before” in the series has proven itself.

Star Trek became a cult phenomenon franchise. Throughout the years 5 TV series were made, over 10 major films, 3 streaming series, and several animated series were made. There is also a Star Trek theme park and thousands of comics and collectibles.

Even after Shatner received his astronaut wings some people were not impressed. George Takei, another of the original “Star Trek” actors threw some shade at his former on-screen captain. He dismissed Shatner’s flight described the Star Trek actor as “not the fittest specimen.”