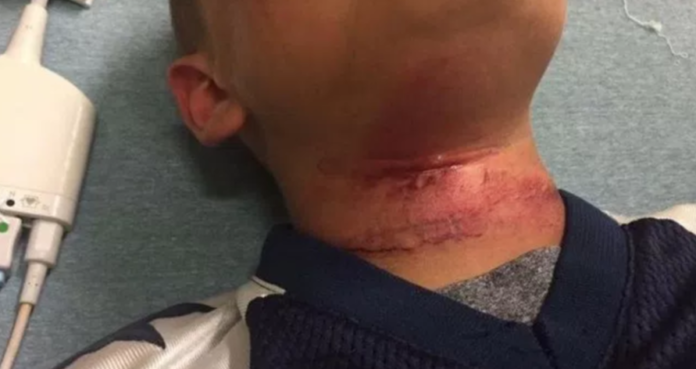 Across America, children are being lynched both in real life and in music videos. This is deplorable and cannot stand.

As noted by Newsweek and the New York Times, an 8-year-old biracial boy was hung from a tree by a group of white teenagers on August 28 in Claremont, New Hampshire. Due to the young ages of all parties involved, the Claremont police department will not disclose names. This situation is beyond haunting.

The older teens reportedly had the 8-year-old climb on top of a picnic table before placing the rope around his neck and pushing the boy off the table and leaving him there to hang. This child’s older sister was present during the horrific ordeal and says her brother grabbed the ropes around his neck, kicked, and turned purple before being able to free himself.

How far have we fallen? What is going on in the minds of children, or anyone really, who thinks it’s acceptable to lynch an 8-year-old child? This boy could have died. The white teens who lynched this biracial child also reportedly hurled racial expletives at him before nearly killing him.

What is almost as terrifying as the aforementioned occurrence is the commentary of Claremont police chief, Mark Chase:

“Mistakes they make as a young child should not have to follow them for the rest of their lives.”

Chase obviously values the lives of lynchers more than the life of an innocent child put through a horrific ordeal. He should immediately resign from his post, and clear the way for an upstanding police chief who values the lives of victims over sociopaths.

Doctors who examined the 8-year-old boy noted their surprise that such inflictions didn’t kill him:

“He never lost consciousness. I think that boy has a guardian angel.”

Sadly, the New Hampshire lynching is not the only one happening in America. As noted by Fox News, rapper XXXTentacion latest ‘Look At Me’ music video features himself lynching a white child as a black child watches.

Americans were shocked by the flagrant callousness shown by casting director, LaShawnna Stanley as she discussed the difficulties of finding parents who allowed their children to be lynched on camera for millions to see:

“We had to delay the video because the mom that originally agreed and said okay but when she got there she didn’t feel comfortable. We delayed for a week. I called a lot of parents. It was a direct booking. No one was okay with their white child getting lynched. With all the racial tension in the world right out they were nervous.”

The above statement translates to: ‘most parents cared enough to not grant a slimy rapper permission to put a noose around their child’s neck.’ The adults who allowed the lynched child to feature in this video ought to be ashamed of themselves. The rapper who engaged in this dishonorable mockery containing horrific, historic roots should be ashamed as well.

First and foremost, the lynching of children is heinous. It is unacceptable in music videos and especially abhorrent in real life. The teenagers who hung the 8-year-old in New Hampshire have to be held accountable for their actions. Trying them as adults is the only appropriate course of action. Teenagers make mistakes, but hanging someone from a tree is [attempted] murder. The teens ran away afterwards because they knew this.

Prosecuting the teenagers [who hung this 8-year-old biracial child] to the fullest extent of the law is the only way to convey that lynching and attempted murder has no place in America. Anything less than the aforementioned is a gross miscarriage of justice.