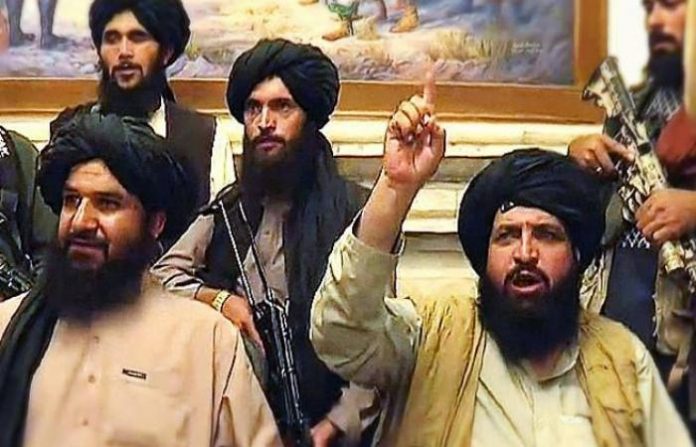 Five members of the Taliban’s new government in Afghanistan are Gitmo terrorists. And they were traded in 2014 for US Army deserter Bowe Bergdahl by the Obama administration.

Their release came in an effort to shut down the Guantanamo Bay detention center. And the hardened terrorists were set free in violation of the law, without the approval of Congress.

At the time, Sen. John McCain warned they were “the hardest of the hard-core” and “the highest high-risk people.”

The Taliban’s recent takeover of the country took place over a five-month period. It all began when President Joe Biden promised them the US would be gone by August 31st. And their insurgence was financed by Pakistan and China.

The strong presence of Gitmo alumni in the government shows the definitive merger of al Qaeda and the Taliban.

Both Fazi and Noori have been accused of ordering massacres.

The five Gitmo terrorists are now in positions of power in Afghanistan. And several of them are holding similar positions to what they had prior to their incarceration.

Women have no rights under the Taliban

So far the hard-line government seems to reflect Islamic fundamentalist principles. No women are allowed to serve as government officials. And many of the rights that women have recently obtained in other countries are being denied by the Taliban.

An example is Saudi Arabia, in 2018, the Saudi King lifted the restriction on women driving.

In Afghanistan, women have been allowed to drive for decades. This is one of the first rights taken away by the newly formed Taliban government.

“Twenty years after the 9/11 attacks, U.S. intelligence documents reveal 229 “rehabbed” former Gitmo detainees have returned to terrorism and killing Americans — and an alarming 66% of them have not been recaptured and are still at large,” reported Paul Sperry in the New York Post.

In 2014,  President Obama justified releasing the terrorists by claiming that America doesn’t “ever leave our men and women in uniform behind.”

Biden’s Afghan pull-out has left at least  100 US citizens, many green-card holders, and up to 100,000 US-allied Afghans. And make no mistake these people are at the mercy of a government that has no interest in letting them live.

The irony abounds if, at some point,  Biden decides to trade the last 39 Gitmo detainees for some of the many friends and allies left behind, as hostages to Taliban 2.0.