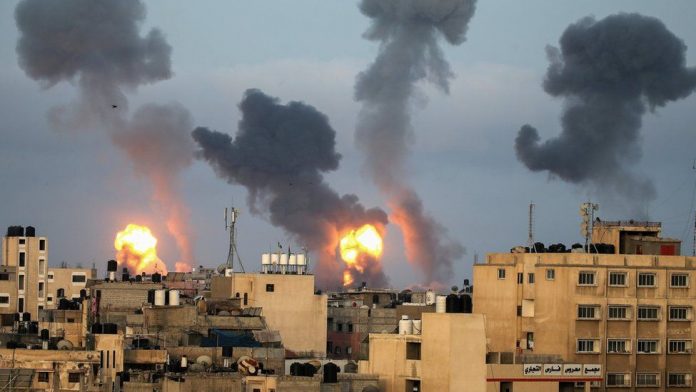 The Iron Dome Isreal’s air defense rocket shield system is playing a key role in the current violence between Palestine and Israel. It is being tested like never before.

The violence between the Hamas militant group in the Gaza strip and the Israeli Defense Force (IDF) has escalated over the last weeks. It is spilling over on civilians and is worse than it’s been in over a decade. And experts say it may soon be erupting into full-scale war as neither side is backing down.

So far, in the last few weeks, over 200 people, including 31 children, have died in Gaza. According to the Palestinian Ministry of Health, 1400 people have also been injured.

Meanwhile, 17  people, including a soldier and a 6-year-old, were killed in Israel. More than 523 others have also been wounded, the IDF reports.

The IDF has hit a record number of targets in the Strip since the beginning of what Isreal has named the Operation Guardian of the Walls.

It has been estimated that at least 3,200 rockets have been launched toward Israel, about 460 of which fell short and landed within the Strip. The Iron Dome defense system has shot down 85 to 90% of the missiles.

Interceptions over Netivot a short while ago

The Iron Dome was developed by the Israeli firms Rafael Advanced Defense Systems and Israel Aerospace Industries which partnered with U.S. firm Raytheon. It went into development in 2006 after a bloody conflict between Israel and Hezbollah, a Lebanon-based Shia Islamist group.

By 2010, Isreal was experiencing multiple rocket salvos being launched from  Gaza strip-based terrorists. Israel’s southern communities were being hit on a regular basis. When an incoming missile was spotted the sirens would go off. And the local residents only had 15 seconds to get shelter.

This all changed when the dome system went online. In April 2011 the Iron Dome, successfully, intercepted a rocket launched from Gaza for the first time.

This radar system picks up any incoming objects in the sky. Algorithms work instantly to identify and calculate the speed and trajectory of each rocket. It then launches an interceptor missile that points towards the offending rocket, mortar, or artillery shell with a range of 4.3 to 43 miles. This causes mid-air detonation with minimal damage on the ground.

The complex defense system cost an estimated $210 million a decade ago. This air defense system can intercept and neutralize the rockets being fired by the militant group Hamas from West Bank and Gaza into Israel.

It was developed using Israeli funds. But the project did receive some financing from the U.S. The development was low-profile. But some experts claim that the money was used to develop the technology for their U.S. partner.

The IDF currently uses 10 armed Air Dome batteries, each has three launchers that house 20 interceptor missiles. It works day-or-night in any weather conditions.

Israel also has another air defense system that works for medium- to long-range rockets and cruise missiles. It is known as David’s Sling. And is named after the David and Goliath story in the Bible.

Videos that appear on social media show the Iron Dome in action. There are streaks of Hamas missiles cruising into Israeli airspace intercepted mid-flight and destroyed in flashes.

“I don’t want to create the illusion that the Iron Dome defense system will provide a complete or comprehensive solution. The system is still in its experimental phase and in any case, we can’t deploy one to defend every house, every school, or every facility,” said Israeli Prime Minister Benjamin Netanyahu in a Cabinet meeting in March 2011.

As the current crisis deepens, Israel heavily relies on the Iron Dome to protect Israel.

In the meantime, the IDF claims it is only making strategic strikes against the Hamas military infrastructure. They recently “took out” several top leaders, buildings where they claim missiles are launched from, and miles of the underground vaults and tunnels where Hamas militants keep their stores of weapons.

There is no doubt that although Israel has only launched a fraction of rockets compared to the other side they are doing massive damage in Palestine. And the strategic strikes are sometimes killing innocent citizens in the Gaza strip. And Israel is coming off as the aggressor since the Iron Dome is working, so well.