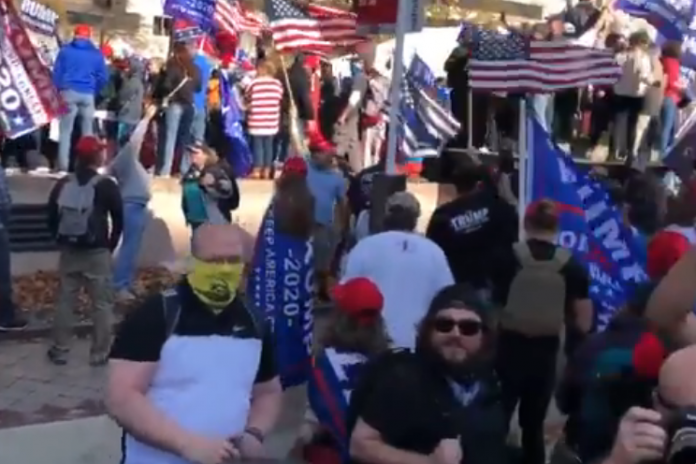 Tens of thousands of ardent supporters of President Donald Trump have turned out in Washington D.C., backing his claims of voter fraud in the US election.

People clad in red, white, and blue, joined by members of far-right groups, rallied and marched as they stood behind the chief executive’s claim of a stolen election.

Hours later, violence erupted between the Trump supporters and counter-protesters.

The video caught by WUSA 9 reporter Kolbie Satterfield showed a group of people chanting “USA” near Freedom Plaza. Fireworks were also on display.

It appears a group of people with the #MillionMAGAMarch is gathering near Freedom Plaza.

Police have the area blocked off.

Footage from NBC4 reporter Shomari Stone shows several clashes between the two groups. The video showed a Trump supporter getting pushed after he bumped up against a group of anti-Trump protesters.

Pres. Trump took to Twitter to express his frustration on the situation, criticizing DC Mayor Muriel Bowser for not doing anything.

“Radical Left ANTIFA SCUM was easily rebuffed today by the big D.C. MAGA Rally crowd, only to return at night, after 99% of the crowd had left, to assault elderly people and families,” he tweeted.  “Police got there, but late. Mayor is not doing her job!”

Radical Left ANTIFA SCUM was easily rebuffed today by the big D.C. MAGA Rally crowd, only to return at night, after 99% of the crowd had left, to assault elderly people and families. Police got there, but late. Mayor is not doing her job!

The series of clashes took place after what had mostly been a peaceful protest action during the day. Thousands of President Trump’s supporters took to the streets to take part in what was billed under many names including the Million MAGA March and Stop the Steal DC.

Pres. Trump has continued to dispute the poll result. In a series of tweets on Saturday, he branded as a “waste of time” the checking of ballots in Georgia, alleging problems with signatures.

The hand recount taking place in Georgia is a waste of time. They are not showing the matching signatures. Call off the recount until they allow the MATCH. Don’t let the Radical Left Dems STEAL THE ELECTION!

Georgia is set to carry out a manual recount due to the razor-thin margins between Trump and President-elect Joe Biden.

US election officials, however, asserted that the 2020 White House vote was the “most secure in American history”, rejecting the Presiden’s voter fraud allegations.