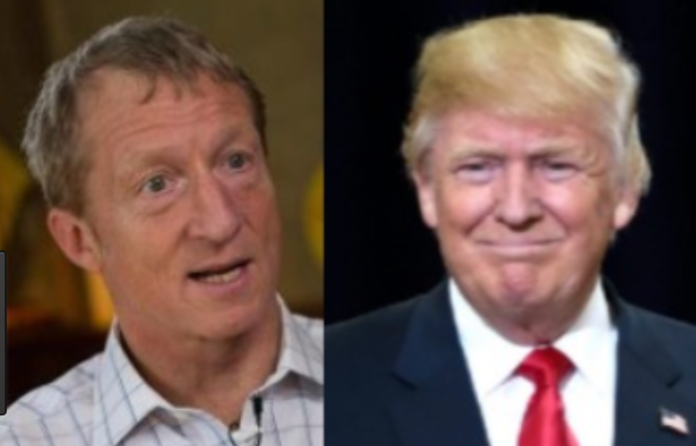 Billionaire Tom Steyer is spending $10 million dollars on advertisement designed to bring about the impeachment of President Donald Trump, as reported by Newsmax.

Steyer’s ad is called “Join Us” in which he states why he believes President Trump deserves impeachment:

“He’s brought us to the brink of nuclear war. And in direct violation of the Constitution he’s taken money from foreign governments and threatened to shut down news organizations that report the truth. If that isn’t the case for impeaching and removing a dangerous president, then what has our government become? I’m Tom Steyer, and like you, I’m a citizen who knows it’s up to us to do something. It’s why I’m funding this effort to raise our voices together and demand that elected officials take a stand on impeachment.”

“Wacky & totally unhinged Tom Steyer, who has been fighting me and my Make America Great Again agenda from beginning, never wins elections!”

Steyer earned his wealth as a hedge fund manager. He is also a staunch supporter of many liberal causes, such as the fight against climate change. Moreover, Steyer is not the first Democrat to call for the impeachment of President Trump.

Many conservatives and Trump supporters are especially critical of those calling for the impeachment of the President. Treason, bribery, high crimes, or other misdemeanors are the only grounds for impeaching President Trump. So far, the President has committed none of these offenses.

Right leaning Americans have asserted that those calling for the impeachment of the President are delusional. Furthermore, they’ve noted that merely disliking President Trump and/or his policies does not merit impeachment. Conservatives have also made the case that Democrats tend to overlook and ignore the aforementioned impeachment legalities.