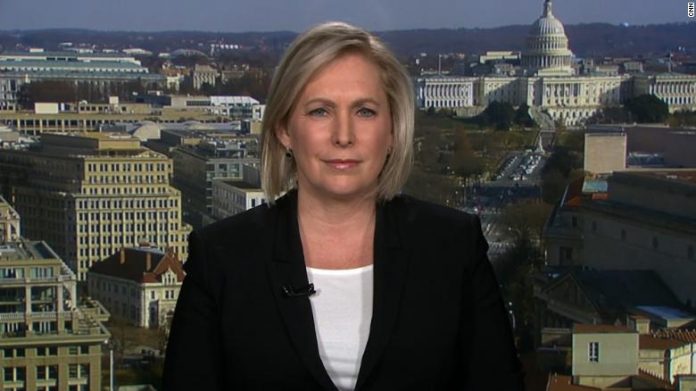 Senator Kirsten Gillibrand (D-NY) has long been a proponent of outing sexual harassers in various circles. She’s tackled the issue in the military, Congress more recently, and now President Trump himself.

Trump is no stranger to controversy. It seems that he welcomes it. This all started when Senator Gillibrand called on President Trump to resign over accusations of sexual harassment from when he was a business icon in New York City. Several women have come forward yet again, given the climate, to detail how Donald Trump had touched and groped them inappropriately over the years.

Trump took to Twitter, as he does, to defend himself. “Lightweight Senator Kirsten Gillibrand, a total flunky for Charles E. Schumer and someone who would come to my office ‘begging’ for campaign contributions not so long ago (and would do anything for them), is now in the ring fighting against Trump,” he Tweeted.

Furthermore, Senator Gillibrand responded on Twitter herself. “You cannot silence me or the millions of women who have gotten off the sidelines to speak out about the unfitness and shame you have brought to the Oval Office.”

Gillibrand held a press conference later, where she doubled down on her criticism of the President’s behavior. “It was a sexist smear attempting to silence my voice, and I will not be silenced on this issue. Neither will the women who stood up to the president yesterday.

About a dozen different women have accused President Trump of sexual misconduct. Senator Gillibrand urged Congress to open an investigation into the allegations because “it’s the right thing to do.”

More than 100 Democratic lawmakers in the House have signed a letter in support of an investigation by the House Oversight Committee. Other Democratic Senators have allied around Gillibrand. Senators Elizabeth Warren and Richard Blumenthal tweeted their support for her.

Furthermore, the irony in all of this is that Trump donated many times to Gillibrand’s campaigns over the years.